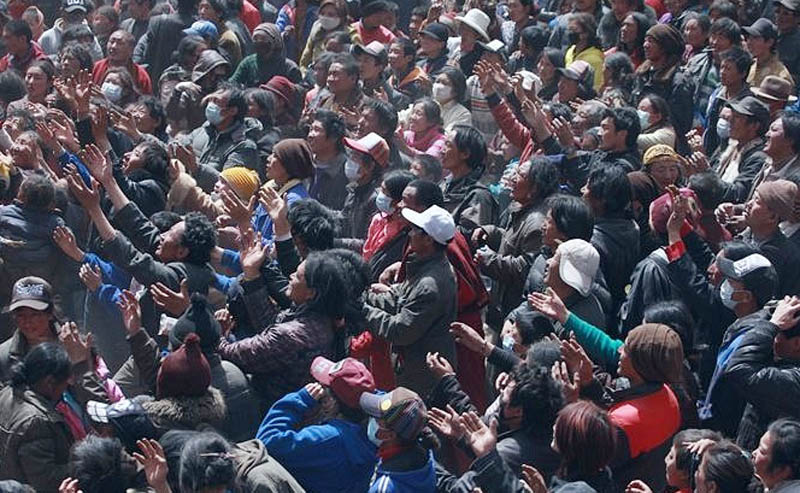 Authorities warned that snow and plummeting temperatures would hit the region Tuesday, adding to the difficulties of devastated survivors who have been forced to camp outside after thousands of homes collapsed.

"We estimate that in the next few days, the rain, snow and low temperatures will harm relief work ,and (those working in) transport, medicine and health should strengthen their guard," the National Meteorological Centre reported.

While the rescue crews continue to sift through collapsed buildings in the town of Jiegu -- the main population centre in the disaster zone -- under a threatening sky, money, grain, flour, water and tsampa are pouring into the quake affected area from neighboring Tibetan regions.

When Tibetan women in Tiga county, 907.5 kilometers away from Kyigudo, heard of the food shortages in the quake area, they started baking 40,000 loaves of Tibetan traditional bread (worth around 150,000 Yuan) and sent the bread to quake survivors along with thousands of kilos of tsampa, cheese and butter.

To express sympathy for the quake victims, public entertainment (such as television shows) will be suspended on Wednesday, and national flags will fly at half-mast in China and its embassies and consulates overseas, the State Council, China's cabinet, said in an announcement.

Meanwhile, Tibetan leader His Holiness the Dalai Lama expressed his eagerness to visit Kyigudo to offer comfort to survivors and prayers for victims of the earthquake. Tibetans in the exile community continue to collect donations and hold prayers for the quake victims.