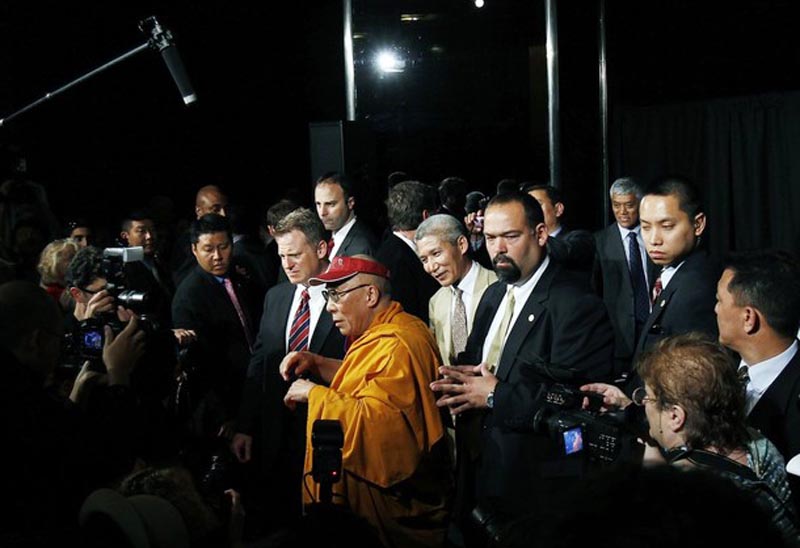 The 74 year old His Holiness the Dalai Lama speaks to the media after a news conference at Radio City Music Hall in New York May 20, 2010. Photo: Reuters

Upon arrival in New York on 20 May, His Holiness gave an audience to Tibetans who are from Kyegudo area in Kham, eastern Tibet, which recently suffered a devastating earthquake. These Tibetans had come to seek His Holiness' blessings on behalf of the people in their hometown, particularly to seek his prayers for the deceased.  His Holiness shared with the group his thoughts when the tragedy occurred.  He asked these Tibetans to convey to their friends and relatives back home that while they have suffered a great tragedy at the same time it is fortunate that the victims have received the prayers of all the great masters of Tibetan Buddhism.

His Holiness has been in New York from 21st-23rd May, holding talks which have tackled subjects varying from Marxism to the war in Iraq. The first three days of teachings at the Radio City Music Hall focused on discussing two Buddhist texts, Nagarjuna's 'Commentary on Bodhicitta' and Shantideva's 'A Guide to the Bodhisattvas's Way of Life.'

Speaking to reporters on Thursday, his first day of talks, His Holiness declared that he was "still a Marxist" in spirit, criticising capitalism for only knowing "how to make profits. The Dalai Lama however also asserted that where communism had been adopted by authoritarian governments such as in China, there has been a suppression of human rights.

On Friday, in a New York hotel room, His Holiness participated in an hour-long 'tweet' session with Chinese web users, hosted by Wang Lixiong, a Chinese writer and critic and convert to Tibetan Buddhism. The Dalai Lama answered questions (asked and voted for by Chinese citizens) regarding issues such as Tibetan autonomy and the replacement of His Holiness after his death. His Holiness blamed the government of China and not the people for the tensions in Tibet and expressed his belief that mutual resolution of benefit to both sides can be found.

On Sunday morning, His Holiness visited Hunter College, speaking to 230 students as part of the Bridge Conference. The Bridge Conference has been established as a Tibetan and Chinese Youth Dialogue Project and the theme of this second conference was 'Friendship and Mutual Understanding'. During the talk, His Holiness criticised the Chinese government for its use of propaganda and censorship. He explained to both the Chinese and Tibetan students present, that freedom of speech and openness "are essential". This topical subject comes shortly after the recent revelation that Chinese authorities have started a clampdown on photocopying in the Tibetan capital Lhasa; all those using photocopiers in the city will have to register their names and addresses before being allowed to do so.

At the Cathedral of St. John the Divine, His Holiness participated in a panel discussion on "Kinship and its Meaning in Our World Today". Joining him on stage were two panelists of Muslim faith, Sakena Yacoobi, who founded the Afghan Institute of Learning and Eboo Patel, founder of the Interfaith Youth Core and member of the Obama administration's Faith Advisory Council. Patel raised the issue of the use of religion in our lives, questioning whether it will be used as "a barrier of division", "a bomb of destruction" or more hopefully as a "bridge of cooperation". Patel further continued his point by praising the Dalai Lama as "perhaps the greatest world leader" who shines "a light on the issue of religion as a bridge of cooperation".

To this final New York audience of just under 2,000 people, including American actors Richard Gere (founder of the Healing the Divide Foundation) and Naomi Watts, His Holiness expressed his view that the U.S.-led war in Iraq may have been avoided through negotiations with Saddam Hussein. This is not the first time the Dalai Lama has criticised the Iraq war.

Every year His Holiness spends time away from Dharamshala, participating in open talks and teachings across the world. The Dalai Lama will shortly be releasing a book named 'Toward a True Kinship of Faiths: How the World's Religions Can Come Together', covering the many subjects raised during his tour.