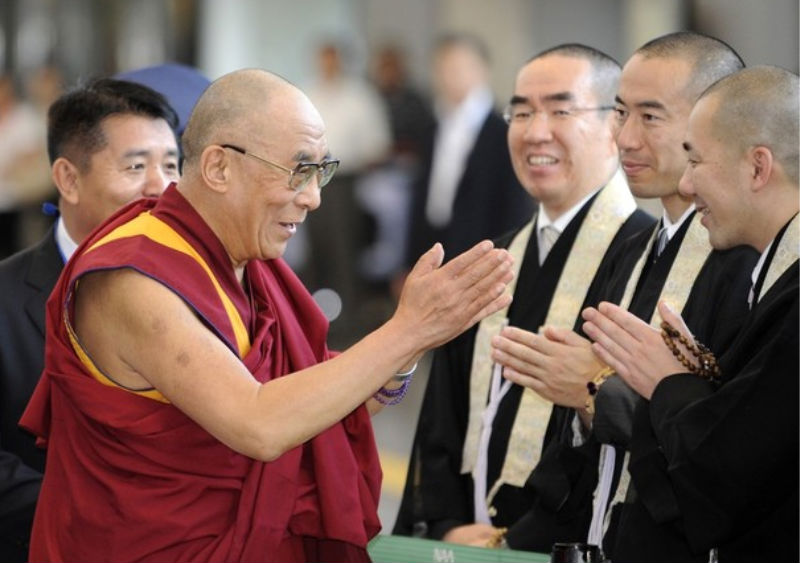 Dharamshala: 74-year-old exiled Tibetan leader the Dalai Lama arrived in Japan this morning for a weeklong religious visit which starts this weekend .His Holiness last visited Japan in November 2009.

On Saturday the Tibetan spiritual leader will visit the Zenkoji Temple, a well-known 7th century Buddhist Temple in Nagano city, and will meet the two Chief Abbots of the Temple. At the Zenkoji temple, he is scheduled to lead a mass prayer for the victims of Kyigudo earthquake, which struck on the 14th April 2010 killing thousands of Tibetans, as well as for the natural disasters happening all across the world. He would then speak to the assembled media.

The Nobel Peace Prize winner will give a public talk on Guide to Positive Clear Light on Sunday at an indoor sports arena in Nagano prefecture, organized by Zenkoji Temple. After this he will visit Saihoji Temple, a Jodo school of Japanese Buddhism, on Monday to address the monks and consecrate an eight feet statue of Buddha Amitabha [Opadme, Buddha of infinite light] constructed by Tibetan artisans for the Temple.

Later In Kanazawa, the capital city of Ishikawa Prefecture, His Holiness will give a half-day teaching on The Heart Sutra (sherab nyingpo) organized by Busshokai foundation (Tibetan Refugee Support Group) on Tuesday, followed by a half-day teaching on Tsongkhapa's In Praise of Dependent Origination (tendrel toepa) and Generating the Altruistic Mind Enlightenment in addition to a public talk on The Essence of Happiness and a Healthy Co-Existence at Pacifico Yokohama Exhibition Hall in Yokohama on June 26, south of Tokyo.

The Tibetan spiritual leader will conclude his tour by making a brief appearance at the Foreign Correspondent Club of Japan (FCCJ) on June 27 and meeting with Tibetans living in Japan on June 28, and then return to India on the same day.