Dharamshala: Tibet's spiritual and political leader, His Holiness the 14th Dalai Lama celebrated his 75th birthday on Tuesday in Dharamshala, the Indian hill town and capital of the Tibetan government in exile. Thousands of Tibetans, Indians and Chinese, among many other nationalities, participated in the celebrations.

This morning, the young Tibetan girls and boys from Tibetan Institute of Performance Arts beat traditional drums and played bagpipes and flutes as His Holiness the Dalai Lama arrived at the main Tibetan temple for the official ceremony. The prime minister of the Tibetan government in exile, Prof Samdhong Rinpoche, raised the Tibetan national flag as Tibetan musicians played the national anthem.

The Tibetan prime minister and the speaker of the Tibetan parliament offered traditional ritual Mandral with prayers to His Holiness the Dalai Lama. A colorful cultural programme by members of the Tibetan community was performed to celebrate his birthday. Among the guests was the 17th Gyalwa Karmapa Rinpoche, one of Tibet's highest spiritual leader.

The Tibetan Nobel laureate expressed his gratitude to the special guests and heads of different societies including Indians, Chinese and others. His Holiness said, "I would like to thank our Indian friends, associations and specially the Chinese delegation who have offered me prayers and wishes for my birthday." 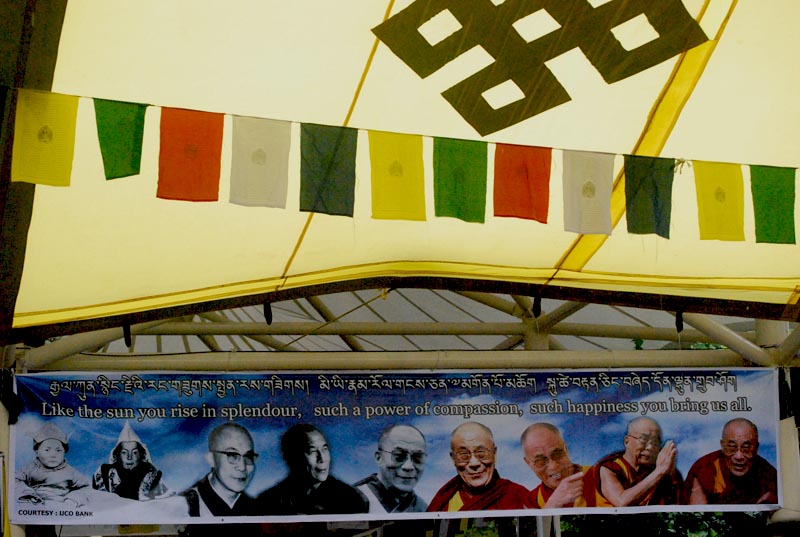 Pointing at a large banner depicting great episodes from his life -- as a child from Kubhum county of Amdho of eastern Tibet, as a young monk, as a spiritual and political leader, as the exiled holy-man who has come to symbolize world peace, human values, religious harmony and the Tibetan freedom struggle -- he said: "when I see those pictures and can see the development, I know my life has not been wasted. Even at this age, I find time for my Buddhist studies, which gives me strength, peace, happiness and keep me in good health."

He urged the crowd to show compassion in their own lives and finished with some practical advice. "Mainly, those Tibetans living inside Tibet have strong feelings about my birthday. They are not allowed to show these feelings, however. I thank them for keeping their unshakable strength, faith and belief," the spiritual leader addressed the crowd.

The 75 year-old Tibetan leader received gifts and traditional white scarves from his Indian and Tibetan followers, sat through a cultural program of songs and dances and watched an exhibition of Tibetan miniature Thangka paintings.

Long-life prayers, functions in Dharamshala and other Tibetan settlements in India and other countries, photo-exhibitions, the gold-medal prize of the Tibetan Parliament and other special events will continue through this year of the 75th birthday of His Holiness.

Please visit the latest celebration gallery of The Tibet Post.