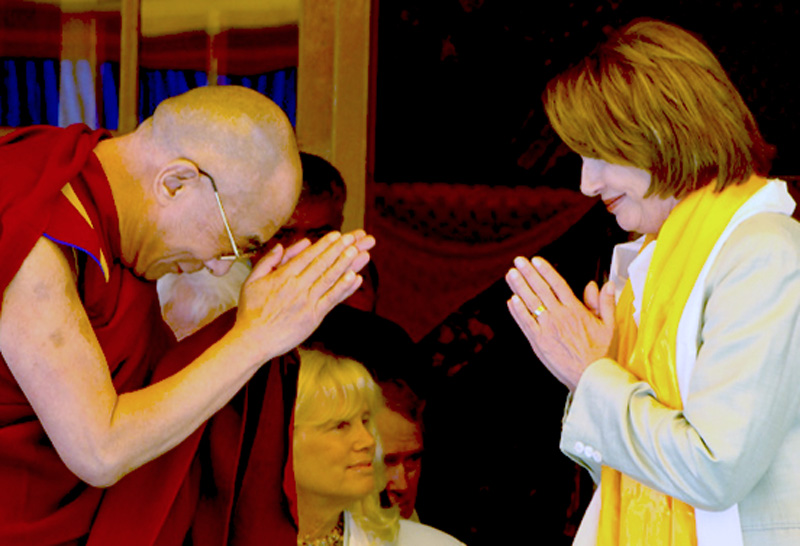 Dharamshala: Speaker of US House Representatives Nancy Pelosi on Tuesday congratulated the Tibetan spiritual His Holiness the Dalai Lama on his 75th birthday and urged China to hold serious talks with him on his homeland of Tibet.

"Today marks the 75th birthday of His Holiness the Dalai Lama. Tibetans inside and outside Tibet, along with Tibetan supporters all around the world, will be celebrating this occasion and honoring a man of peace and wisdom," Pelosi said, recognizing the Dalai Lama's work in Tibet, making the human rights situation in the region an international concern,"she said in a statement.

"His Holiness often describes himself as a ‘simple monk, no more, no less.' But His Holiness represents much more to many people around the world. For thousands, he is a source of spiritual refuge and a connection to inner peace and harmony. He has traveled the world, building bridges between the different faiths. He has used his position to promote wisdom, compassion, and non-violence as a solution - not only in Tibet - but to other world conflicts."

The head of democratic lawmaker, a frequent critic of China's human rights record, said the exiled spiritual leader "has made the human rights situation in Tibet an issue of international concern, and it is long past time to resolve it. A negotiated agreement would ensure internal stability in Tibet and bolster China's reputation in the world."

"His Holiness has expressed a willingness to visit China and engage directly with high level officials. It is my sincere hope that Beijing will send a confident message by inviting His Holiness to China for substantive discussions," said Pelosi.

"His Holiness has asked for international support for his non-violent efforts to engage the Chinese government. I am proud to say the U.S. Congress has been a bedrock of support for the Tibetan cause. In 2007, I stood with President Bush to award the Congressional Gold Medal to His Holiness the Dalai Lama for his ‘many enduring and outstanding contributions to peace, non-violence, human rights, and religious understanding,' she continued in her statement.

"On the 75th birthday of His Holiness the Dalai Lama, I offer my continued appreciation of his life's work promoting compassion, peace, and human rights for all of the people of the world," she concluded.