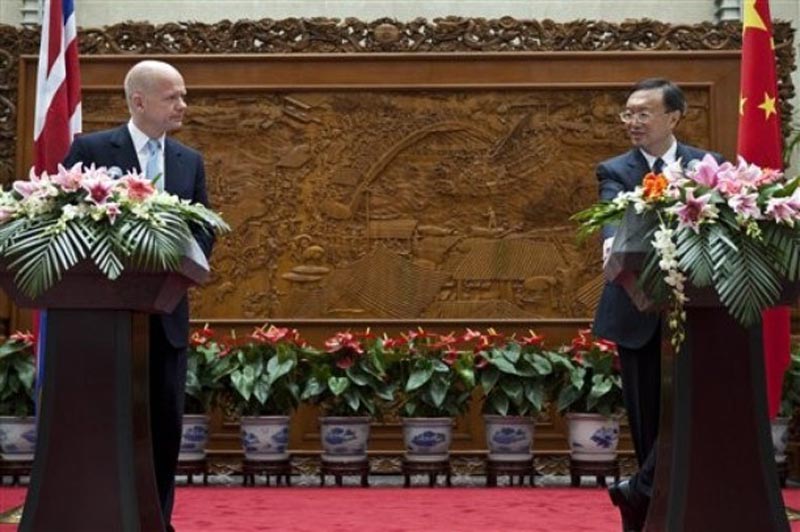 Dharamshala: British Foreign Secretary William Hague, during a meeting with his Chinese counterpart Yang Jiechi in Beijing on Wednesday 14th July, called for "autonomy and human rights in Tibet". This being his virgin trip to China since assuming his position, he seized the opportunity to voice what are, allegedly, his long-held concerns over the frequent abuses of human rights in Tibet. After making conciliatory overtures to Jiechi towards establishing a closer working relationship between their respective nations, Hague said, "We want to see long-term stability for Tibet, which in our view implies work on human rights and greater autonomy." An objection to Chinese state tyranny was, therefore, couched tactfully in terms of China's national interest, with a stress laid on the "stability" that remains crucial to such a vast, diverse nation undergoing rapid social and economic changes.

Hague's demand sits awkwardly upon the controversial statement of his predecessor, David Miliband - "Like every other EU member state, and the United States, we regard Tibet as part of the People's Republic of China," Miliband said in a written ministerial statement issued on October 29th 2008, backing the One China policy adhered to by many of the world's most powerful democracies including America and, the host of the Tibetan Government-in-Exile, India. This was an historic about-turn for Britain on Tibet, an abandonment of a position held for 94 years - its colonial roots being in British India's concern for an independent Tibet to act as a buffer state against their Chinese and Russian enemies - which recognised China's "special position" and "suzerainty" in Tibet, but not Chinese sovereignty, and was entrenched in international law, with the UN Security Council recognising it as distinct from other "provinces" of China. Miliband, however, declared this distinction and the very notion of "suzerainty" to be outdated.

Miliband's statement received huge criticism from a broad coalition of academics, Free Tibet activist groups and the Tibetan Government-in-Exile, who asked what Faustian prize China offered in return. Thubten Samphel, the latter's spokesman, said his government was "greatly disappointed. For the British Government to change its position at this stage to us seems counter-productive." The Free Tibet Campaign claimed the British government was "rewriting history". Robbie Barnett, a British-born historian of Tibet at Columbia University, said that Miliband's statement gave away the only leverage the outside world had to influence events in Tibet. Miliband did, however, pledge his firm support towards His Holiness the Dalai Lama's mission for greater regional autonomy within China, and strongly backed talks between the Chinese Communist Party and envoys of His Holiness, the latest round of which had just wound up in Beijing - talks which later proved to be abortive, with China conceding nothing.

It would appear that, despite loud support for a free Tibet among their citizens, the governments of Europe and America have aligned themselves with His Holiness the Dalai Lama's Middle Way approach: under this pragmatic, concessionary proposal, the Chinese government would retain control of diplomacy and defence, but allow Tibet to be governed by an elected body. However, with substantial business interests in and an increasing financial dependency on the rocketing economy of China, it is naïve to expect more from these governments that the odd principled statement, like that from Hague, with no concrete political or economic pressure to follow; the sanctions declared frequently against the Burmese military junta are very unlikely to be repeated here. Such is the reality of a global power shift from West to East, in which the ‘moral authority' of Euroamerica becomes increasingly impotent and rising states like China become ever less accountable to international law. Tibet, it often seems, is on its own.