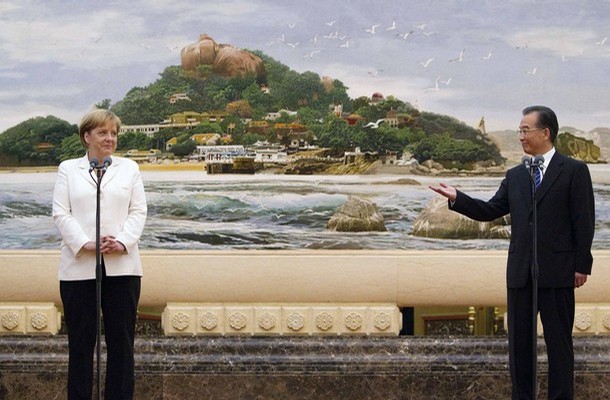 Dharamshala: German Chancellor Angela Merkel has arrived in China for a four day official visit and to mark a new camaraderie between the two countries. China finally erased the sour gnaw for Germany, when German welcomed His Holiness Dalai Lama to Berlin Chancellery in 2007. Adrienne Woltersdorf, head of Deutsche Welle's Chinese Service quote, "The relations between China and Germany haven't been that stable in the last two years". But, this visit to Beijing is expected to bolster economic knot between the two countries. She was received with military honor before the talk and expected to meet Chinese President Hu Jintao.
Germany is the biggest European trading company for China, summing up to more than a quarter of the trade between China and the European Union according to 2009 Chinese statistics. Now, the two countries have linked ten cooperation agreements in Beijing to establish joint venture on Trucks and Lorries. The joint ventures involve a sum of $938 Million USD (6.35 billion Yuan). Angela Merkel also marked that, "China has shown it's faith in the Euro and we are committed to strengthen the currency". At present, China is planning to go green, and Germans are the most advance in these fields. They also planned to carry out new cooperation on electric vehicles, wind energy and solar energy, not only to benefit the two but recover the current global economy.
The economic scheme might roar, but the two countries differed on Human rights values. German believes in promoting human rights, protection of minorities, freedom of opinion, the press and religion freedom. German faced many criticisms from China over the differences in Human Rights Issue in the past years. Angela Merkel is much appreciated in German for her values and practice of Human rights. She mentioned about Tibet issue, when Chinese Prime Minister Wen Jiabao stopped in Berlin on his European tour in 2009. German Chancellor was inevitable to mention on human rights to avoid condemnation from German parliament and the Civil Society in Germany even this time. She expressed that German has vital interest in helping China in solving Chinas' problem areas i.e. Tibet, although her main focus of the tour is to promote economic interest between the two.