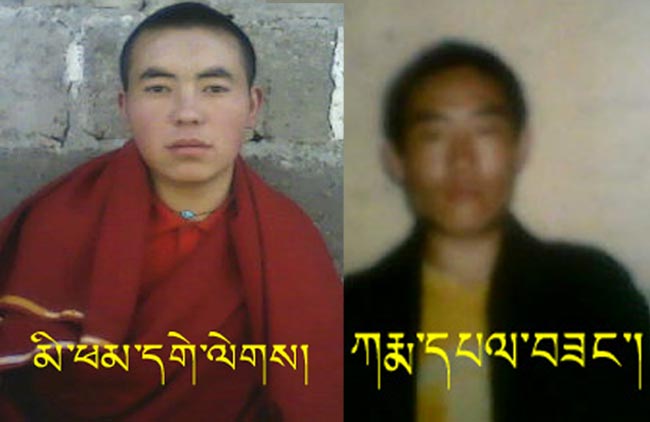 Dharamshala: The local Chinese Intermediate People's Court on 25 October 2010 sentenced two Buddhist monks from Chamdho region, eastern Tibet to nine and half years' imprisonment for their activities and involvements in the March 2008 peaceful uprising to against China's rule over Tibet, according to a latest information received by The Tibet Post International.

A report sent by Ven. Monlam Tharchin on Monday said that Karma Palsang, 26 and Mipham Gelek, 22 from Zigar Monastery, Dege Jodha county, eastern Tibet were arrested in 2008, were sentenced to nine and half years respectively. Until their appearance in the court, their whereabouts have remained unknown since their arrest.

After the crackdowns that took place in all parts of Tibet, Tibetans from many areas in Dege Jodha district, eastern Tibet have continued to refuse to farm, to show solidarity for Tibetans from all over of Tibet. They resist Chinese pressure to plant, sow and toil in order to remember those who have lost their lives under the Chinese, those who have been brutally beaten and arrested, and those who are missing.

The latest report said that local Chinese officials in the areas in last year have informed Tibetan farmers that they will be awarded 10,000 Yuan if they sow crops, and have even announced that they plan to reward Tibetans who follow government orders with luxury cars during the horse-race festival. But instead of taking advantage of these offers, farmers continue to show solidarity with those Tibetan countrymen and women who have suffered under the crackdown.

Just before the March 10 this year which coincided with the 51st Tibetan national uprising day, Chinese authorities arrested Palsang and Gelek among some Tibetan monks from Zighar monastery who after burning the Chinese luxury cars to against the Chinese repression in Tibet.

The sources say that Chinese officials held various meetings to practice the 'patriotic re-educating law', which forces local Tibetans, particularly Buddhist monks to denounce their spiritual leaders, including His Holiness the Dalai Lama. During the spring prayer festival last year, many Tibetans were brutally beaten and arrested after burning wild-animal skins, and that many of them are still missing. "Tibetans are still under Chinese pressure of patriotic re-education if they decide to perceive their cultural and religious identity," the report further said.