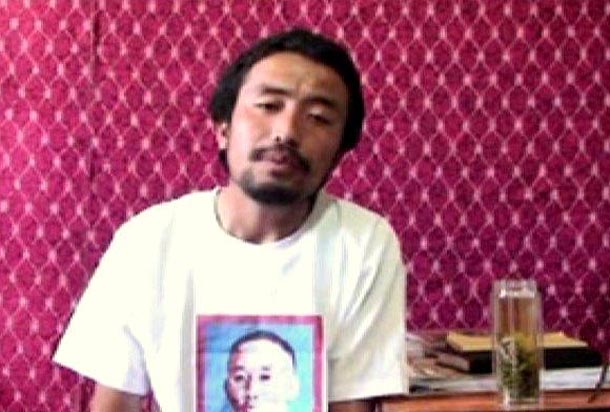 Dharamshala: Kalsang Tsultrim, an outspoken Tibetan author and activist better known by his pseudonym Gyitsang Takmig arrested again on 16 December 2010, from Sang-chu County, Kanlho "Tibetan Autonomous Prefecture" (‘TAP'), Gansu Province. The Public Security Bereau (PSB), of Tsoe City called him for questioning and after that they did not release him.

They (PSB) continue to keep him in detention center of Tsoe city PSB, according to a report  of the Dharamshala-based Tibetan Centre for Human Rights and Democracy (TCHRD).

Kalsang Tsultrim was frist arrested on 27 July 2010 from Dzoge County in Sichuan Province on the basis of committing political error. He composed and distributed 2,500 VCDs discussing Tibetan history and recordings of the current desires, aspirations, concerns, and dreams of Tibetan people in Tibet.

He also wrote Miyul La Phul Ve Sempa (summarized as Sharing the Inner Thoughts in My Heart) a book which illustrates the concerns of the Tibetan people. Though enquiries have been made by family members, no response or reasons have been given by the officials for his arrest.

In September 2010 around 40 friends and family members went to ask about his whereabouts to the local officials, to which they were told to go back and that they would ask the leaders and inform them. He has been taken to different prisons since his arrest and was released from Kanlho Prefecture prison. On 15 October 2010, Kalsang Tsultrim was released on the condition that he would not participate in any politics related work.

Kalsang Tsultrim is from Sang-chu county, Kanlho "Tibetan Autonomous Prefecture" (‘TAP'), Gansu Province. Born in 1980, he went to school at the age of 9 and when he was 13 he joined Gi-tsang Gaden Chochor Ling Monastery. In 2005 he joined the Gansu Province's Buddhist Institute and graduated in 2009.