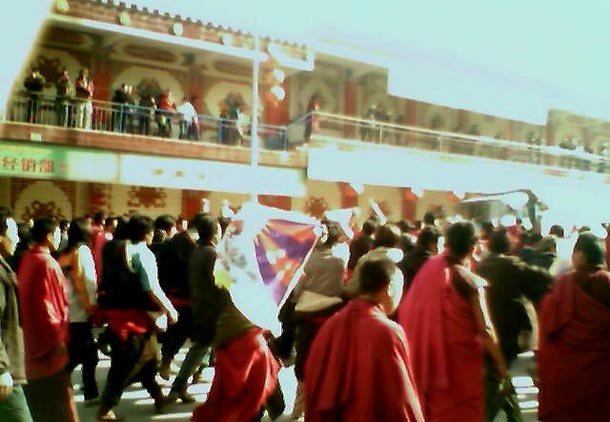 Dharamshala: - Reports emanating from Ngaba region of Tibet in recent days suggested that the situation of Kirti monastery is very tense between the Chinese military and Tibetans. On the 15th and 16th of April, the Chinese government ordered that every official, and teacher of Ngaba County, should attend the ‘patriotic re-education' of the monks of Kirti Monastery.

Kanyak Tsering from exile based Kirti monastery told The Tibet Post International that Many Chinese officials came from Dzorge County of Tibet to attend and assist those in Ngaba County. During the meeting, Chinese officials sat upstairs, and the Monks downstairs. The main speaker; -the head of the so-called ‘United Work Front Department'- of Ngaba Autonomous Prefecture, said to the audience of Monks "Whether the Monastery will close or should be destroyed is in your hands, that is dependent on your behaviour".

He added darkly that some Monks have given information to the outside world regarding the protests at the Monastery, and that they will be punished. "Since 2008, because of the actions and continuous illegal activity of Monks from Kirti Monastery, every community or society of Ngaba County has had no peace, and the disruptions have destroyed the security of the area".

After 8 o'clock a curfew has been imposed, and no monks are allowed out from their dormitory. If monks break the curfew, they will be beaten by Chinese security, which has an enormous presence in the Monastery. A case has been reported by a contact that one dormitory with seven monks, received no food for three days. Later, other monks collected food and gave it to them.

On the evening of April 15th , some military personnel and some Police officers collided with a fence belonging to a local Monk, in a vehicle. On the 20th of March, the Clinic of Kirti Monastery was closed by Chinese Officials, leading to a lack of provisions for unwell Monks.

Sometimes military and Chinese Police officials enter the dormitory, asking questions as to who people are. When monks reply that they do not know the individuals in questions, the Chinese officials accuse them of being dishonest, and use threatening techniques towards the monks.

On the 12th April, an incident involving the people of Ngaba County and the Military highlighted the bravery of the local community. The local Tibetans said to the Chinese officials, ‘if the Monks are facing imprisonment, we will protect them, even if we die'. The Chinese police said ‘whoever is willing to die for them, give your signature'. Around 300 local people signed a paper, which argued that if the Chinese Government take Monks from Kirti Monastery, the locals are willing to give their lives to protect them.

At the time, there was a large crowd, which is why the Chinese stopped the petition at around 300 people. The Chinese police documented the evidence with photographs; to use against protesters in the future. Since the 16th of March, around 100 monks have disappeared from Kirti Monastery. The monks cannot be found in the inner sanctum of the Monastery, or in the local area. There is no information as to their whereabouts.

When Phuntsok the Monk who self immolated himself in March, a writer named Gho Sherab returned from Xinning to to Ngaba County was arrested. It is not know where Gho Sherab is imprisoned, and there has been no official response from Chinese officials.

On the 17th of April, at meeting, many highlighted that around 800 Chinese officials came to Kirti Monastery. The Monks at the meeting stood up and replied to questions given by the officials. They did not give answers as the Chinese wished. The Chinese response was that the Monks behaviour had ‘not improved'. They added that the re-education was essential. The fence that the Chinese had built around the Monastery has only 3 exit gates, which makes it easier to keep close security.