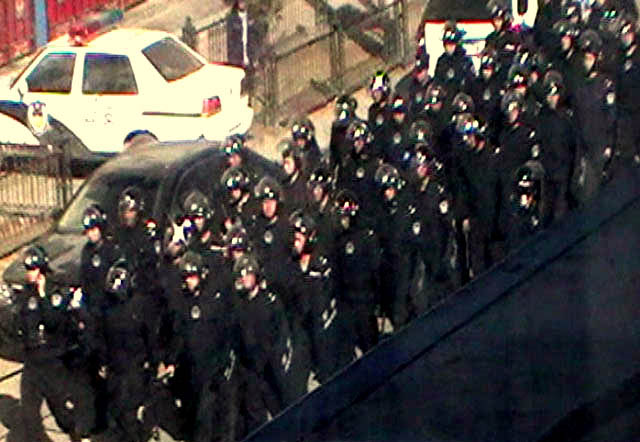 Dharamshala: - Seeping from the heart of China's tireless campaign to gain control over Tibet and its people are continued reports of contentious activities originating from the hills of eastern Tibet. The situation at and around Kirti monastery, the area's largest monastery and home to over 2,500 monks, has been escalating since the self-immolation of a resident monk on March 16th who was protesting Chinese rule and genocide of Tibetan culture.

The most recent news from the monastery, provided by Kanyak Tsering to The Tibet Post International. supplement earlier reports of arbitrary detainment and torture of monks, food shortages, and a security presence which has transformed the monastery into a de facto prison. Meanwhile, Chinese authorities maintain that all is "normal" and that their authoritative presence is merely a means to "prevent unidentified people from entering."

Increased security includes a newly constructed fence around the monastery. Also, police and military personnel, some eight hundred of them, march about intimidating the monks with their so-called "patriotic re-education" campaign. Supplemental forces arrived on Monday from Ngaba and nearby Dzorge county. The following day they visited every dorm and, in groups of ten officials, bombarded the monks with questions. When answers were not conducive to the campaign, the monks were abused.

On Wednesday morning more security forces from surrounding counties arrived and in the afternoon they searched the dorms and harassed the monks. They demanded the monks' opinions of the current situation. Unsatisfactory opinions were met with physical abuse. Some were tied to a tree in the courtyard and left there for unspecified lengths of time. After the dorms were searched, some monks reported that recording devices had been placed inside their rooms.

More reports of specific arrests have surfaced. On April 8th, 27-year-old Lobsang Gelek was arrested and taken from the monastery. His whereabouts is still unknown. Parents of another monk have shared their concern. Aga and Mari from the Miruma nomadic zone claim that their 24-year-old son, Tsering, was arrested and brought to an unspecified location. They have been denied any information pertaining to his whereabouts or reasons for his arrest.

Other monks were recently released from custody. They provided accounts of their experiences. Some were tied to pillars, some were tortured with electric shock treatments, and others were burned with sticks. Some lost consciousness during the treatment. Upon release, several of the victims were in such a state as to be unable to care for themselves.

The conflict has sparked public interest and support. Locals have been gathering since April 12th to monitor the situation and do what they can to divert any detentions and arrests. Hundreds have gathered, most of whom are over sixty years of age. The security forces crassly insist that the supporters return to their homes, but such requests are ignored by the dedicated vigilantes who keep watch day and night.

The people and areas around the monastery have also felt the wrath of the security forces. On April 17th, a large group of officials arrived at the nomadic areas of Miruma and Raruwa (near the monastery) and set up a camp, the characteristics of which indicate a lengthy stay. On the same day, nomadic peoples were forced to sign documents, the content of which was not discussed and the people are still unsure about what they were made to sign. The following day, April 18th, forces visited Jolek Village and searched every home of the bewildered locals.

The Chinese are steadfast in their claims that everything is as it should be at and around the monastery. They claim that the relations between the eight hundred personnel marching about the grounds and the monks is "harmonious".

The monks prefer to use "threatening" to describe the way they feel about the imposing group that has taken over their home.

The Chinese Xinhua News Agency declared that the supplies are "sufficient" and that the monks have food supplied by the monastery. But the monastery has in fact never provided food. Rather, the monks are individually responsible for procuring their food. This requires constant flow, which is currently denied. Kanyak Tsering, speaking on behalf of the Kirti-monastery-in-exile, poses some frustrated questions to the apparently ill-informed officials responsible for such observations. "Are they aware that food has never been provided by the monastery? If they are aware of this, why and how did the monastery all of a sudden begin providing food?"

At a press conference held on April 19th, Chinese Foreign Minister spokesman Hong Lei reported that "According to our knowledge, the monks in the Kirti Monastery enjoy a normal life and normal Buddhist activities, and the local social order is also normal." His "knowledge" is much different from the knowledge of the monastery's residents.

The next day, officials aimed to put this normal image of every day life on display. They opened the doors of the Mani Prayer wheels around the monastery and invited locals for a photo shoot. All offers were denied until cash offers were made. The scene was photographed by the organizers who claimed this to be all part of a routine day.

While the Chinese authorities continue to suggest a picture perfect scene at the Kirti monastery, reports from its residents contradict these proposed realities. Without intervention, the outcome could be yet another devastating clash between Chinese enforcers and Tibetans. The power clearly rests in the hands of the Chinese. The head of the official Chinese Work Committee (the administration responsible for the "re-education" campaign) gave an explicit reminder to this effect when he addressed the monks on April 19th. He warned them to be careful because he and his people "have the power and authority to kill all of [them]."