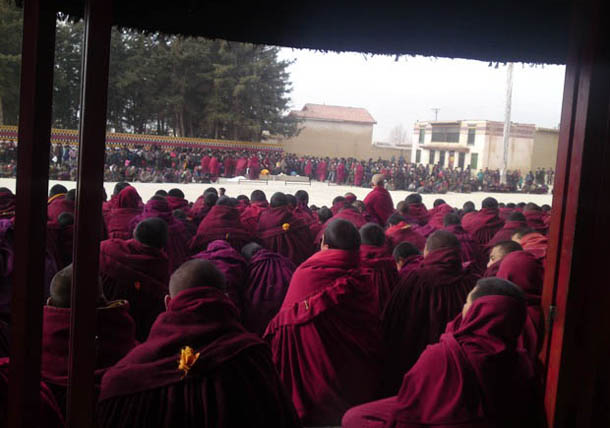 Dharamshala: - In a recent turn of events at the Kirti monastery in Ngaba County, two monks were, on May 2nd, sentenced to three years of imprisonment each. The monks are Lobsang Dhargye, 31, and Kunchok Tsultrim, 33, both from the province of Amdho. The two monks were both sentenced by the so-called People's Court of Ngaba county and transported away to serve their time in undisclosed locations.

Lobsang Dhargye, who bears his father's first name, became a monk at Kirti monastery as a child. In 2000 he joined the Lhasa monastery of Dirpung to study Buddhist philosophy there. However, in 2008 he was captured on camera participating in a demonstration staged by monks from Dirpung monastery against the Chinese government. His participation in the protest landed him 5 months behind bars in different detention centres, after which he was sent back to his native Ngaba province and told to stay in the area until further notice, less he obtained permission to leave the county. On April 11 this year, military police forces came to his dormitory and arrested him without prior notice.

Kunchok Tsultrim, born to father Lotsul and mother Sonam Dolma, is also a monk of Kirti monastery and furthermore he was serving as the treasurer of the monastery up until his arrest on March 16. The charges on which he was incarcerated are unknown at this time of publishing.

On May 5, the Chinese police and military forces occupying the Kirti monastery put an end to a month-long strike on the part of the monks. The strike was begun on April 2 and entailed the monk's absence from the so-called re-education classes held by Chinese communist agents, but it was called off when the Chinese authorities stated that if the monks did not attend and complete a 3 month re-education program, the period of re-education might be prolonged up to a year, adding that they "would not give up" on schooling the monks in the ways of communism.

Presently, Kirti monastery is still occupied by plain clothed military and police personnel, but in the surrounding areas, uniformed forces have been seen hiding in the hills and spying on the local inhabitants. Similarly, all of the dormitories in Kirti monastery have been equipped with surveillance cameras and microphones, leaving the monks constantly supervised.

The newest addition to Kirti monastery, a cluster of dormitory-rooms in the eastern part of the compound, have been entirely taken over by Chinese authorities and now serve as the quarters for military and police officers.