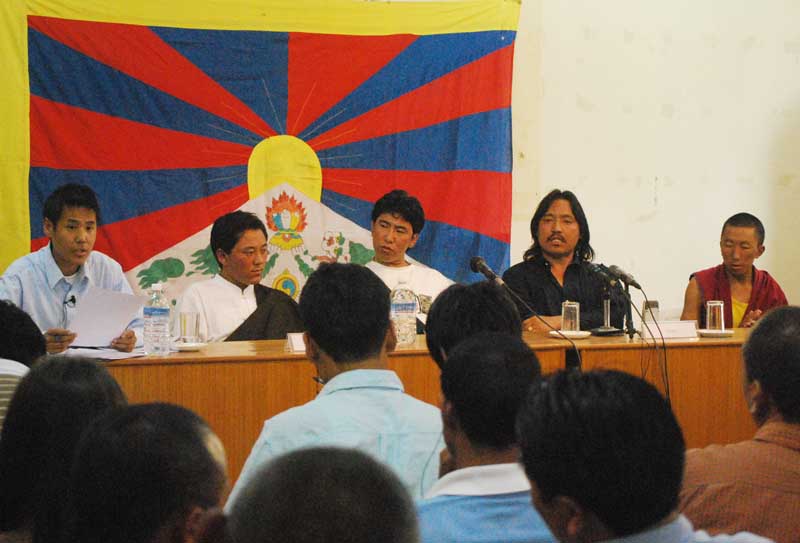 Dharamsala: The Department of Information and International Relations, Tibetan government in exile, organized a press conference today featuring 4 newly-arrived Tibetan refugees who partook in the March 2008 peaceful protests in Karze county, eastern Tibet. About 30 representatives of the international press were present. Tsewang Dhondup shared his experiences at the conference. He joined the 24 March 2008 peaceful protests against the Chinese government because he was unable to accept China’s claim of having liberated Tibet or its efforts to indoctrinate Tibetans, including young children, to denounce His Holiness the Dalai Lama.  “During the Cultural Revolution period, my grandfather Dampa was arrested and detained for 8 months on the charge of displaying a photograph of His Holiness the Dalai Lama in his home.

My family barely had enough to eat. On the day of the protest, I was participating in the construction of an irrigation channel necessary for farming. I learned of a demonstration and headed for the main nunnery. It was quite far to travel and, when I arrived, it was evident that the police force had opened fire on the 200 laypeople and 300 nuns present. A Tibetan monk from the Chokri Monastery named Kung, son of Tashi Gyaltsen and approximately 20 years of age, had been shot by the Peoples Armed Police (PAP) at the site of the protest. I saw his body lying on the ground and, surrounded by evidence of Chinese repressive measures and brutality, rushed to try to save him. I was then shot, once in my hand and once in my back; the second bullet pierced through my midsection and the first paralyzed my entire arm. I attempted to carry the monk to a safe place, but by then I was barely conscious and unable to carry him further. Then my brother carried him. Badly injured, we fled to the mountains.  My wounds soon became infected and infested with maggots. We had no access to medical care. The pain was unbearable; I came close to committing suicide. My brother Lobasang Thupten risked his life to obtain medicines in a nearby village. On the way, he was subjected to extreme cold and suffered frostbite. We lived like wild animals – Tibetan people in their own land.

Tsewang Dhondup was born on 8 October 1970, song of Tenzin Dakpa (Tenlu) and Norbu Lhadon in Chokri Gorong Village. He began attending at the age of 8, but due to the lack of proper educational facilities and qualified instructors, he was compelled to work as a shepherd and, later, as a small-scale businessman.

My brother, who was born to Gyurgha and Tsering Dolma in 1978, was compelled to leave his wife, two children and our 65-year old mother behind in order to help me escape Tibet by motorbike. Our uncle was sent to jail.

Tibetan people have been denied the basic Human Rights to live freely in their own land. They are subject to strict restrictions. The Chinese government maintains a policy which propels the gradual extermination of the Tibetan people. Tibetans are frequently relocated and reinstated in temporary quarters; many face hardships when the short-term financial assistance proves inadequate. I survived my ordeal on the hope of appealing to the international media to visit Tibet, despite the limitations imposed upon reporters. You will shed tears for the miserable livelihood and unbearable suffering endured by the Tibetan people.” 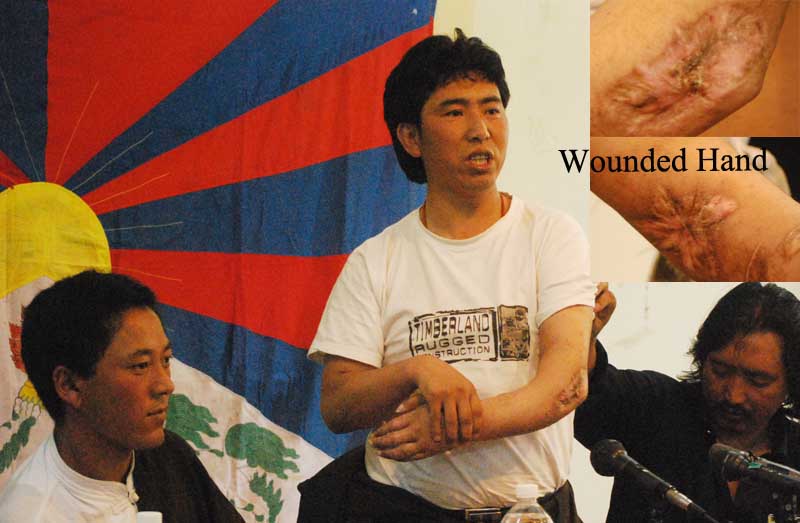 Five Tibetans – four nuns and one layperson – were arrested on 25 March 2008 and later sentenced to a term of 3 consecutive years. Their names are Wangmo, Yepung Donyang, Dolma, Yangsto and Kelsang Dorjee. Three additional nuns – Khandro Lhamo, Choedon and Yangtso – received 7-year prison terms. Sonam Yarphel, a businessman, was sentenced to 10 years in prison on the charge of ‘leaking information to the outside world.’ Lobsang Yarphel received 3 years in prison and Dorjee (Kampung) was sentenced to 4 years. Kampung’s father Jamyang was shot during a peaceful demonstration in Kardze County.  His health is reportedly deteriorating with little hope of rehabilitation, as he was deprived of medical attention during his imprisonment.  Pelgah was arrested on 9 March 2008 and sentenced to 3 years. On 20 March 2009, Sonam Dhondup, Norbu, Jampa Tashi, Yeshi, two monks from the Menyak Monastery and one layperson from Dadowa were arrested. On 15 April 2009, Sonam Dhondup and Norbu were give 3-year prison sentences. Rigzin Karma, Chodak, Rigzin, Tseyang and numerous others were accused of ‘separatism’ in the arrest warrant issued by the Karze Public Security Bureau (PSB) in 2008.

Madhue Gonpo, a fellow refugee, stated: “I would like to emphasize that the Chinese policy of repression in Tibet causes indescribable suffering.  On 18 March 2008 my friend Karze Ngoega and I, along with ten others, led a peaceful protest in the market square of Karze Prefecture and crossed two bridges. Ten protesters were arrested and subsequently sentenced to serve between 3 and 8 years. My friend Ngoega was sentenced to 8 years in prison. Many Tibetans from Kanze County are still missing, including Shaomeimei, Tsering Dorjee, Nangsal Wangden, Namgyal. Four were injured by bullets. Twenty people are believed to have been fatally wounded. Four have been confirmed dead: Ngoega, Jamyang, Pema Dechen and Tseten Dhundup.  The Chinese enact pressure upon senior lamas and religious figures; a leading monk from the Bora Monastery, Geshe Sonam Tsentsuk, was targeted by the Chinese government in 1999 and died after he was injected with poison. “

Tsering Gyurmey added that, “The authorities publicly offered a monetary reward for information leading to the detainment of escapees. This year, the sum was increased from 20,000 to 30,000 Chinese yen.  The Tibetans named on the arrest warrant are: Tsering Neme (Tsering Gyurmey), Madhue Gonpo, Bhumo Shao Menmen, Tseten Puntsok and Tashi Namgyal (Kelsang).” His brother Tenzin Ngodup and another man were sentenced to 3 years for demonstrating on 20 May 2008. His uncle Sonam Nyima also arrested in April 2009 and subsequently released.