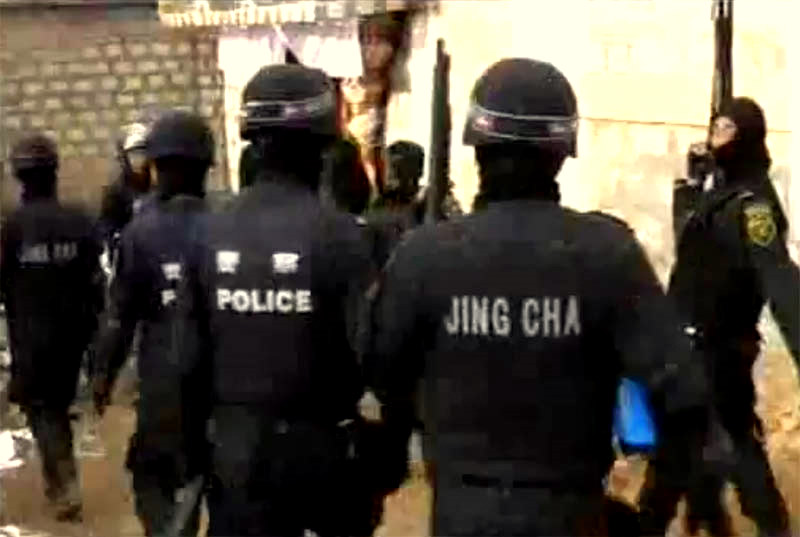 The footage was filmed when the Chinese police, SWAT teams and paramilitary troops conducted household raids in the region following Tibetan protests in March 2008.

This video filmed discreetly during the raids show the heavy intensity of the scale of police operations to hunt down protesters and is an explicit evidence of terror tactics used to subdue any signs of unhappiness with China's rule in Tibet.

Scenes from the video show villagers being pulled out of their homes at gun point some dragged out of bed and most looking panic-stricken and terrified. Conversations in the video take place in Tibetan and Mandarin.

The individuals shown arrested in a huge show of force in the video are allegedly suspected of having taken part in the protest of 11 March 2008 led by monks of Sera monastery and nuns from Chusang monastery, both of which are located in the outskirts of Lhasa.

To the outside world, this is the first glimpse that reveals the fear and intimidation tactics used to keep Tibetans from protesting against the Chinese rule.

The Department of Information and International Relations of the Central Tibetan Administration who received the video made it available to the public.

The contents of the video have stirred numerous discussions regarding the grim state of affairs within Tibet.

This video evidence can be viewed on www.tibetonline.tv. Subtitles have been added to the same wherever the audio is comprehensible.

On 10th of March 2008, large scale demonstrations took place across the Tibetan plateau.
The largest protest since the uprising in 1959, 300 places saw mutiny and many a protester was killed, thousands more injured and arrested.

The following day, on 11th March 2008, monks from Sera monastery and nuns from Chusang monastery led protest marches against the Chinese rule in Tibet.

Dogde town, where the video was filmed is a rural area located near Sera monastery.

The individuals being arrested by Chinese forces are allegedly suspected of having taken part in the protest that shook the nation.