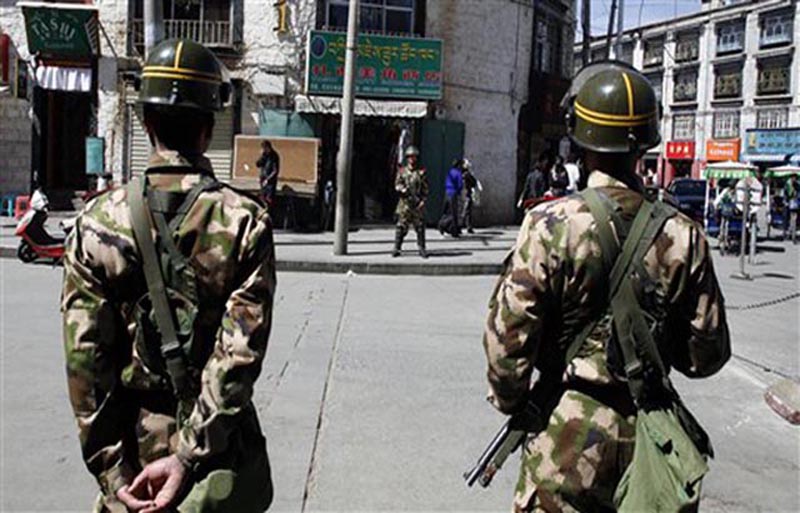 Tibet: - A Teenage Schoolgirl in Amdo region and a Mother of Four in Ngaba County have become the two latest Tibetans to commit self-immolation in protest of the Chinese government.

Tsering Kyi, 19, and Rinchen, 33, have become the twenty-fourth and twenty-fifth Tibetans to commit acts of self-immolation since 2009.

Tsering Kyi committed her act of protest in a busy market in Machu, located in the traditional Amdo region of Tibet, at 3.00 PM Tibetan time on March 3.

According to sources, local vendors threw stones at Tsering while she burned.

Chinese Security Personnel arrived on the scene and attempted to lock down the market by confiscating cell phones and issuing strict orders to locals not to discuss Tsering’s protest, which almost prompted a conflict between local Tibetans and Chinese Security Forces. In addition, local websites in the region have been shut down.

Tsering’s body is currently in the custody of Chinese Security Forces.

The special security office was set up as a measure to prevent further protests by the monks in Kirti Monastery, who have been under increasing pressure from The Communist Party to cease protesting the Chinese Government.

Rinchen was the mother of four children, the youngest of whom is only a few months old. Her self immolation protest follows the passing of the children’s father last year.

During her protest, she shouted demands that His Holiness the Dalai Lama be allowed to return to Tibet and for Tibetan Freedom.

Ngaba County has been the site of sixteen of the twenty-four self-immolation protests since 2009. These protests have resulted in heavy regulations in the area, specifically on Kirti Monastery, by Chinese Security Forces.

One reporter from The Guardian, who managed to sneak past Chinese Security Forces, described the area as reminiscent of conflict zones in Iraq and Northern Ireland, and that the weapons that the Security Forces were using as, “medieval.”

News regarding  the condition of Rigzin Dorje and Lobsang Kunchok, two Kirti Monastery Monks who committed acts of self-immolation, has also surfaced.

Rigzin Dorje, 19, who committed an act of self-immolation on February 8, passed away in a Chinese military hospital on February 21. He lived in Me’uruma Township in Ngaba, and was the youngest of six siblings.

According to Kirti Monastery, the Chinese government declined to return the remains to the family or to the Monastery, but rather cremated Rigzin without proper Buddhist Ceremony.

In addition, the Chinese Government is strongly discouraging locals in Ngaba County from having prayer vigils or religious ceremonies for Rigzin.

Lobsang Kunchok, a monk in his late teens who committed self-immolation on September 26, 2011 while shouting protests against the Chinese Government, has had all of his limbs amputated.

Sources say that he is currently being fed through a tube while suffering abuse from hospital staff for aspiring to “destroy his country.”

His family is currently being denied the right to visit him.

Meanwhile, Tibetan authorities outside of Tibet have expressed concern that these kinds of protests may increase with Uprising Day fast approaching on March 10.