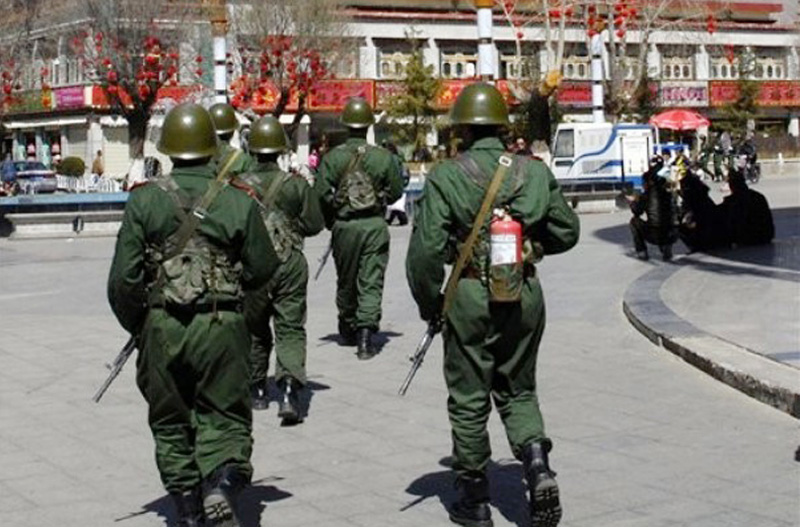 Dharamshala: The situation in Tibet continues to worsen as Chinese authorities tighten up their security measures around the areas neibhouring India and Nepal. This step was taken to prevent Tibetans from escaping into exile after taking part in demonstrations against Chinese rule in Tibet.

Passang Dolma, a Tibetan living in exile, has quoted contacts in the region as saying, "As a result of the chain of self-immolations and demonstrations in eastern and central Tibet, China has tightened security in the Tibetan areas bordering India and Nepal." Dolma said that, early this year, China deployed extra armed and plain-clothes security officers in towns and villages in the border areas. She also reported that, "Besides deploying armed soldiers, the Chinese government has set up committees in every village and town to spy and report on Tibetan activities in the bordering regions."

Several Tibetans have taken part in public protests demanding their freedom and the return of His Holiness the Dalai Lama from exile. On many such occasions the Chinese security forces have, without caution, opened fire on unarmed protesters, killing and wounding many. Those protesters who manage to escape the police are hunted down by large-scale search parties, organized by the Chinese.

Passang reported that many protesters, in fear for their lives, try to flee to India and Nepal and that others prefer to kill themselves rather than getting arrested and tortured by the Chinese police. This was reflected in the case of Gonpo Rigzin, 25, who stabbed himself to death. He reportedly told his family members, while being hunted down, that he would take his own life rather than allow the Chinese to torture him in captivity.

Gonpo Rigzin had taken part in the January 23 mass protests in Drango and was apparently caught on Chinese police's CCTV surveillance cameras.

Chinese courts in eastern Tibet have recently handed out harsher punishments to Tibetans for participating in anti-China protests. Three Tibetan monks were handed varying prison sentences for being connected to the fiery protest of a fellow monk.

"The director of Bongtak monastery, Venerable Jamsem, was given a nine-year prison sentence, while his subordinates Khendup and Samgyal were sentenced to eleven and ten years, respectively," said a resident of the area, who spoke on condition of anonymity.

The three monks belonged to Bongtak monastery in Themchen county (Chinese: Tianjun) of Tsonub region. They were implicated in the death of Damchoe Sangpo - a 40-year-old monk who set himself ablaze on February 17 after protesting Chinese security intrusions at the Bongtak monastery.

Tibetan girl arrested and beaten for staging a protest

On June 24, Jigme Dolma, 17, staged a solitary peaceful protest at around 11am (Tibet Time) in the main market of Karze (Chinese: Ganzi) County.

She threw leaflets in the air and called out for the return of His Holiness the Dalai Lama, freedom in Tibet and the release of the Panchen Lama and Tibetan political prisoners. She was arrested only minutes after staging her protest, upon which she was beaten and hauled away by Chinese security personnel.

Following the arrest, her father requested the local police to allow him to see his daughter. However, he was denied access. On June 28, Jigme Dolma's father found out that his daughter had been taken to the hospital.  He then waited at the hospital entrance to see her where he noticed that she had sustained injuries to her hands, back and legs and was being escorted by local police personnel. He finally got to meet his daughter on June 29.

Jigme Dolma is detained in Karze County's Detention Centre, according to a source. However, her medical condition and well-being remain a matter of great concern to her family and well-wishers.

Chinese authorizes have also tightened their security and increased the network of check-points meant to monitor the activities of pilgrims approaching Lhasa.

In mid-June, Namgyal Tso, 50, fell to her death, while her companion, Ani Agon, 50, was hospitalized after being seriously injured due to falling off a cliff.

On their way to Lhasa, the women took a higher path in the mountains to avoid the Chinese blockade in Chamdo County. They travelled from Luchu (Chinese: Lugu) county in Gannan Tibetan Autonomous Region (TAR) in China's Gansu province, to seek blessings at the main temple, Jokhang, in Lhasa.

The Chinese authorities have taken such measures due to the recent self-immolation cases in the Tibetan capital city. Reports state that at check-points pilgrims who are found without proper identification are being stopped and sent back to their places of origin. Thus, the women decided to take a more dangerous route.

In addition, sources said that travellers were not allowed to stay in Lhasa for more than a month, and were forced to register with Lhasa police on their arrival and consequent departure.