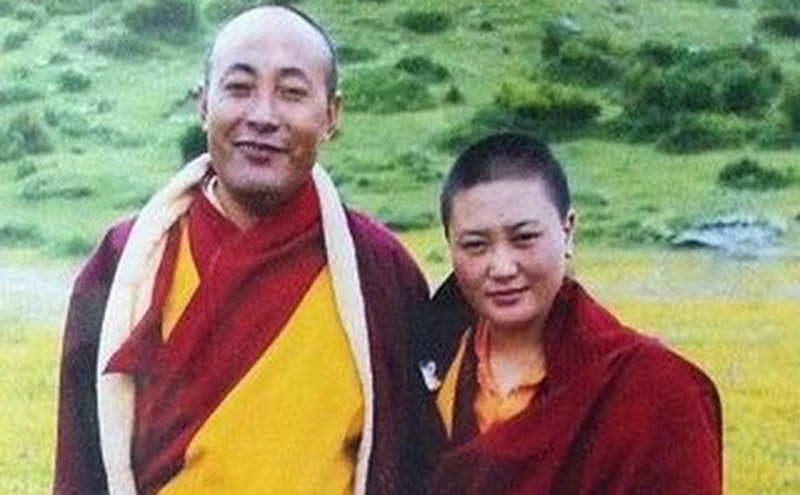 Dharamshala: According to media reports published in May this year, a high-ranking Tibetan religious figure in Kham region of eastern Tibet and his niece, a nun, died in an accidental fire on 6 May 2012.
Thubten Nyandak Rinpoche, 45, and his niece, Atse, 23, were honoring Tibetans who died in the self-immolation protests with butter lamp tributes, when their house caught fire. However, reports said it was unclear whether this was an accident or a case of self-immolation.
The Chinese authorities ruled the case as an “accident”, and the press and media did not highlight the event.
However, a post published by Tsering Woeser on her blog (http://woeser.middle-way.net/) states the details of the incident and concludes that it was a case of self-immolation and not an “accidental house fire”.
Thubten Rinpoche was the former abbot of Dzokchen monastery in Kham region - the site of recent protests. He was a strong advocate of Tibetan rights, culture, religion and unity and was also the head of the Drakhar Monastery in Minyak Lhagang, Kham region. His niece Atse was also known to be a strong supporter of the welfare of Tibet.
Recently, a Chinese website called Weibo published their photograph with a detailed account of the incident. A few days before May 6, Thubten Rinpoche organized a prayer service in honour of Tibetan self-immolators. At the meeting he gave a speech about future plans for supporting the free Tibet movement and, towards the end of the service, monks, nuns and other attendees made prayer offerings of butter lamps.
The day before he died, the Rinpoche asked his students to move the many butter lamps to his house and then sent them all away, including his Chinese pupils.
On the morning of May 6, he and Atse prayed at their home for the self-immolators. In a call made to his family he stated that it was necessary to do a good deed and that they would offer the butter lamps for the benefit of those who set themselves on fire for ”the cause of Tibet”.
Soon after his house caught fire, Thubten Rinpoche and his niece were found dead.
The police authorities arrived on the scene and declared the incident was an accident and that the duo did not sacrifice their lives. The police also warned the community not to speak about the incident in public. Fearing that the authorities would close down the monastery, its supervisor agreed to abide by the instructions.
The relatives of Thubten Rinpoche accepted the authorities’ version of events. The Chinese gave them 10,000 yuan and several bags of rice in exchange for their silence. Very few media reported the incident as it was classified as an “accidental fire”. Locals did not proclaim the two as heroes because they feared the possible consequences. However, the local Tibetan community believes that they may have self-immolated for the cause of Tibet.
Although Thubten Rinpoche and Atse appear to have given up their lives for Tibet, some consider that their relatives undermined their legacy by taking bribes offered to them by the Chinese authorities. Even so, the family and the local Tibetan community reportedly hope that, like the many other Tibetans who have self-immolated for the Tibet cause, their names too will be remembered.