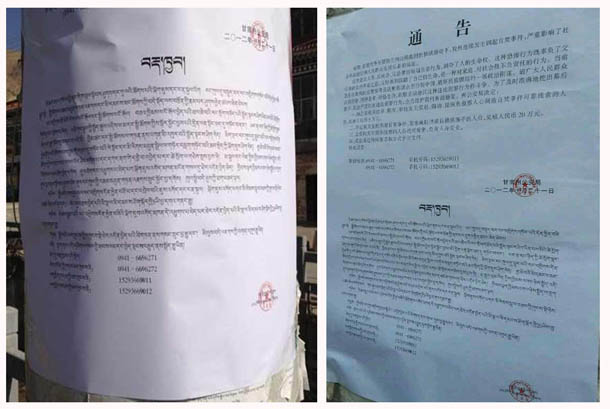 Dharamshala: Chinese authorities in Kanlho, north-eastern Tibet (Chinese: Gannan Tibetan Autonomous Prefecture in northwest China's Gansu Province) are offering tipsters a reward of $7,700 for information about planned self-immolations in protest against the regime's rule in Tibet.


Since the notice was issued by Gannan Public Security Bureau on October 21, two more Tibetans have died after setting themselves on fire near Labrang Monastery.

Notices written in Tibetan and Chinese have been posted everywhere in the area asking residents to assist Chinese police in preventing the self-immolations.

Gannan police issued a notice saying that people who tip off Chinese police about immolation plans will be rewarded 50,000 yuan. The notice also said that people who provide information on the “criminal acts” or the "black hands" who organized four recent self-immolations would be rewarded up to 200,000 yuan.

The notices also blamed the spiritual leader of Tibet, His Holiness the Dalai Lama, and "separatist" forces, saying  "recent incidents of self-immolation are a hidden political ploy instigated by the Dalai clique and separatists with the empty hope of splitting the country and destroying social harmony."

The notice stated that, "Self-immolation acts are against humanity and society as well as against the constitution. It an extremist behavior which deprives people of life.

“Self-immolations have seriously effected social harmony and the working order of people’s daily lives. The Tibetan people should voluntarily fight against such illegal acts.

"It is a terrorist act, showing contempt for life and is a socially irresponsible behavior towards his/her family. We must fight against the illegal and criminal acts to maintain our harmony and stability

"1. Public Security Bureau will offer rewards of 50,000 yuan [U.S. $7,913] for information on the scheming, planning, and instigation of such acts.

"2. Information leading police to the planners of the four most recent self-immolations in Kanlho—believed by most observers to have been solitary acts—will receive a reward of 20,000 yuan [U.S. $3,165].

"3. Public Security Bureau will protect and take responsibility for the safety and confidentiality of the informant, and the reward will be delivered in secret.

"4. The rewards will be provided through special methods as well as a special process."

Over 58 Tibetans have set themselves on fire in the three traditional provinces of Tibet since March 2009, in protest against Beijing’s heavy-handed rule in the occupied region.

All of the self-immolators have called for the return of His Holiness the Dalai Lama to Tibet and for freedom in Tibet.