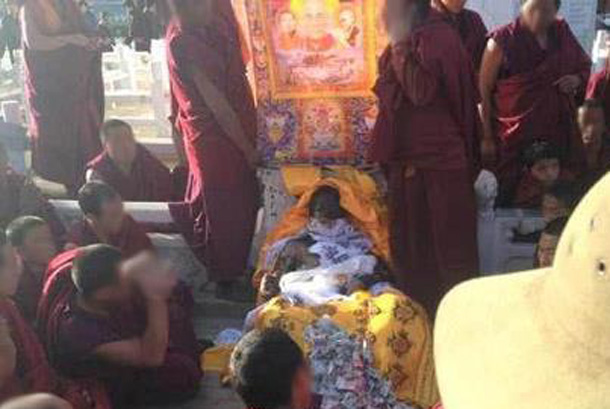 As  he set himself ablaze, Jinpa could be heard shouting for a return of His Holiness the Dalai Lama to Tibet, according to reports from Lhachab Jinpa (a member of the Gu Chu-Sum Politial prisoners asscociaton in exile).

Following his protest, the monks of the local monastery as well as local Tibetans took his body to Dhongyal-le (usually a location where high lamas are cremated).

It has been reported that thousands of people reportedly attended his funeral, where his remains were cremated. Sources state that the situation is becoming tense, as the local Tibetans refused to leave the area.

The self-immolation of Jinpa comes amid a shifting handover in Beijing for politcal power. In return, Tibetans have staged a staggering number of protests; at least 69 since 2009, against Chinese rule.

This week alone has witnessed at least 7 reports of self-immolations; a harrowing number of lives - largely young Tibetans including women, parents and monks, attempting to get their message to the world yet remaining peaceful against Chinese forces.

On the 7th November it has been reported that a man from Pekar township of Driru County (Kham: Eastern Tibet) set himself ablaze. There have been no further details released, amid draconian blackouts enforced by the Chinese authorities.