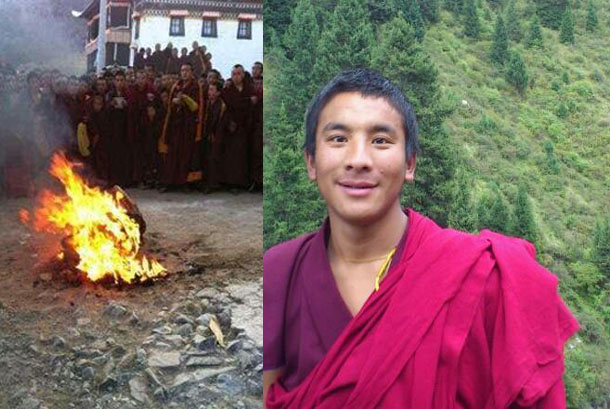 Dharamshala: Two sources from Kirti exile monastery in Dharamshala, northern India, have reported another self-immolation in Tibet.
Losang Yeshe and Kanyag Tsering said that 24-year-old Konchok Phelgye, a monk from Dringwa Sumdo monastery in Dzoege county, Amdho region, northeastern Tibet, set himself on fire outside the main assemby hall of Taktsang Lhamo Kirti monastery at 5.20pm on December 8.
Konchok then joined his hands in prayer, shouting, “May His Holiness the Dalai Lama live for 10,000 years! May His Holiness the Dalai Lama be allowed to return to Tibet! May Kirti Rinpoche be allowed to return to Tibet! May Tibetans in Tibet and in exile be reunited!” His body was engulfed in flames and he died at the site of his protest.
As Konchok made his protest, other monks present reportedly gathered around him in shock, shouted his name and recited a prayer begining, “Losang Gyalwa Kungi Nyingje Ter…” - the prayer usually recited in Kirti Rinpoche’s honour. Konchok's remains were then carried back to his room at the monastery and hundreds of monks continued to chant prayers.
Konchok was from Gonda Dewa village in Dringwa township. His father is Konchok Kyap and his mother Drolma Tso. He joined Sumdo monastery as a child and in 2010? attended the larger Taktsang Lhamo monastery to study scripture in the senior philosophy class. He is survived by nine family members, including his parents.
The Chinese authorities have reportedly now placed Kirti monastery and surrounding villages under a security blockade.