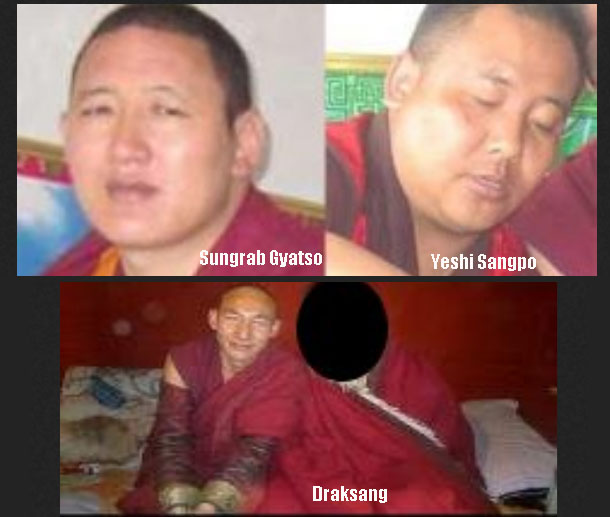 According to latest information received by Tibetan Center for Human Rights and Democracy, local police detained three monks from Khyamru Monastery in Serchen County for sharing information about the mass student protest that broke out on 26 November in Chabcha.

On 1 December, local Public Security Bureau (PSB) officers detained Sungrab Gyatso, 36, and since then no one including his family members and friends has received any information about his whereabouts and condition.

The two other monks, Yeshi Sangpo, 37, and Draksang, 26, never returned to the monastery after they went to the County government office for interrogation.

A reliable source with contacts in the area said that on the night of 2 December, a group of People's Armed Police (PAP) came to Khyamru Monastery with the intention to detain Draksang, the monastery's caretaker and Yeshi Sangpo. Some monks who were inside the prayer hall refused to open the door for the armed police who then locked the door from the outside.

The next morning, on 3 December, when other monks came for morning prayers, they asked the PAP officers about the locked door of the prayer hall. The PAP officers told the monks that they were just doing their duty, and if anyone wanted any explanation, he should visit the local government office. Soon, over 150 monks of the monastery marched to the local government office but they were stopped on their way by local Tibetans particularly the elderly who requested the monks not to petition the government office for fear of escalating tensions.

Later, a group of special armed police along with five PSB vehicles and some government officials arrived at the scene. Sources say police and government officials told the Tibetans that they had names of about 10 Tibetans who would be detained soon but for the time being they wanted to question Draksang and Yeshi Sangpo. Failure to hand over the two monks would result in further problems for the monastery, the police and officials warned.

Following the warning from the police on 3 December, Draksang and Yeshi Sangpo left for the local government office thinking that they would be released after answering some questions, as was promised by the police and government officials. But both the monks never returned to the monastery. Their condition and whereabouts remain unknown.

Sungrab Gyatso, son of Mr Phagmo Tsering, was born in Lhade Chu-nga Village in Serchen County. Yeshi Sangpo and Draksang were born in Telnag nomadic camp in Qinghai Province. TCHRD is still confirming other details about the monks.