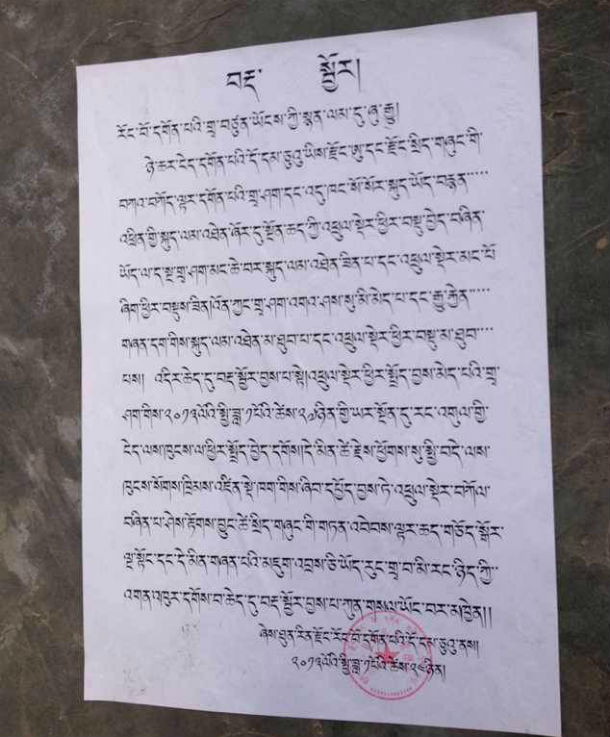 Dharamshala: - Chinese authorities have now heightened the campaign to eradicate all avenues of receiving Tibet-related radio and TV news available on foreign channels by issuing a public notice, which announced monetary fines and actions for those who fail to surrender banned satellite dishes and other broadcast equipment by 27 January 2013.

The notice, dated 24 January 2013, declared Yuan 5,000 fine and "other consequences" for those who use satellite dishes and other equipments to watch programs on foreign channels, according to Dharamshala based Tibetan Centre for Human Rights and Democracy (TCHRD0..

Chinese Communist Party and government officials are said to be vigorously implementing the contents of the notice in Rebkong (Ch: Tongren) County in Malho (Ch: Huangnan) Tibetan Autonomous Prefecture, Qinghai Province. Restriction is said to be severe in Rongwo Monastery, according to sources inside Tibet..

The notice was issued in the name of Thunding County Rongwo Monastery Management Committee. The Monastery Management Committees, a recent creation of official efforts to systematically control and restrict Tibetan monasteries, have replaced majority of the Democratic Management Committees (DMCs), which were made up of monks elected by their own communities. The MMCs (Chinese: zhusidanwei/gongzuozu, "monastic government work-unit") are unelected committees, made up of Communist Party cadres, enabling the Chinese authorities to keep tighter surveillance and control over Tibetan monastic institutions.

However, sources with contacts in Rebkong said that the body, which issued the notice was a secret intelligence office recently established in Rebkong County. The location of the secret office is not known as it deals with intelligence activities, according to sources. The exact founding date of the secret office is unknown but sources said it was launched a few months ago. Both security forces and government officials are said to be working there.

The recent crackdown on satellite dishes in Tibetan areas appear not only to be a deterrent against self-immolation protests but also a part of the intensified 'patriotic education' campaigns and the 'Nine Must Haves' program under which government aid will be provided in terms of electricity, roads and pension in return for installing state provided satellite dishes and newspapers all of which feature state-controlled news and views. These two state propaganda campaigns are emphasized and highlighted by many high-level Chinese government officials in Tibet.

In the beginning of this year, Chinese authorities in Malho Prefecture cracked down on "illegal" satellite dishes and other broadcast equipment to ban foreign news channels in Tibet. In various parts of Rebkong County, Chinese authorities confiscated "illegal" satellite dishes and cables, putting a ban on Hui Muslim shopkeepers from selling the banned equipment and scraps. Broadcast equipment, cables and spare parts capable of catching signals of foreign news channels that were being sold in some Hui stores were seized and burned in huge bonfires.

On the morning of 18 January, a group of Chinese officials arrived at Rebkong Rongwo Gonchen Monastery and cut off all the TV cables in the monastery's premises and monks' quarters, taking away all the old cables and equipment. As the officials began to leave, a monk could not control himself and shouted at the officials, "What you did today reminded me of the Cultural Revolution days. Even if the party secretary of Rebkong County were here today, I would say the same thing." To this, an official responded, "You will only suffer if you take this to the higher authorities. Besides I will get my promotion for doing my duties." The authorities warned of heavy monetary fines and severe consequences if anyone failed to surrender the banned cables and equipment.

This is to inform all the monks and nuns of Rongwo Monastery,

Recently, the staff of [Rongwo] Monastery Management Committee, based on orders from the County Party and County government office, installed new TV satellite dishes and cables which replaced the old TV cables used by monks in their quarters and assembly hall. The old cables and TV equipment were duly collected from many of the monastic quarters.

However, some monks' quarters, which were lying vacant during the absence of the respective monks who were away on some matters, have yet to install the new broadcast equipment and turn in the old equipment and cables they used. Due to this, this notice is issued.

Those monastic quarters, which have yet to turn in their old TV cables and satellites should do so on their own to this office before 27 January 2013.

If anyone fails to do so, then respective law enforcement agencies such as the Public Security Bureau will undertake investigation. [And] if found keeping such broadcast equipment, then keeping with government orders, punitive fine of Yuan 5,000 and other consequences should be borne by the monks themselves.