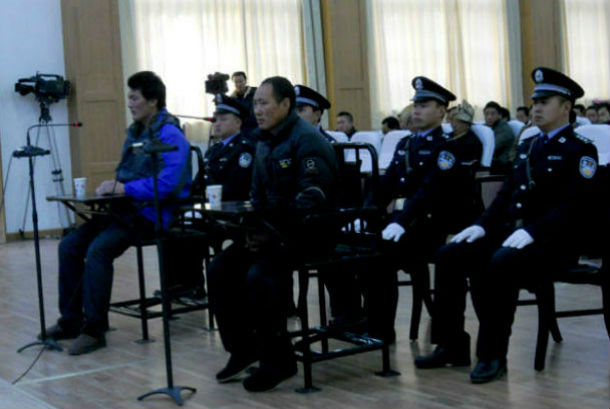 Dharamshala: - A Chinese court has given heavy prison terms to six Tibetans "for their roles in an October self-immolation protest case in eastern Tibet," reported the Chinese state controlled news agency Xinhua on 31 January, 2013. The court officials claimed that they were guilty of urging eight people to self-immolate, three of whom died, according to a report by Xinhua, the state news agency.

A Tibetan farmer, Dorjee Rinchen, 58, died on 23 October 2012, after setting his body on fire in protest against Chinese rule at the main street of Sangchu county, which was located near a Chinese military camp.

His body was taken to his home village in Sangchu after the self-immolation protest. This was done to protect him from getting into the hands of Chinese officers. His family members were able to conduct necessary rites and rituals after his death. Security officers even tried to stop the Labrang monks from going to Dorjee Rinchen's home for prayers.

The Xinhua report however did not say whether the defendants were given the right to choose their own lawyers. It simply said, "Tibetan translators were provided for the trial. During the court hearing, the six defendants and their attorneys, and the prosecutors, all expressed their opinion."

There is also the perennial question of how the confessions were extracted from the accused or if due legal process was followed to convict them.

The communist regime claims most Tibetans are happy and touts its efforts to bring economic development to the region. But, Tibetans accuse China of cultural, religious and political oppression. They are also angered by the regime’s repeated vitriol directed at the spiritual leader of Tibet, His Holiness the the Dalai Lama, who is deeply revered by Tibetan people.

Since 2009, at least 98 Tibetans have set themselves on fire in Tibet protesting China's continued repressions and demanding freedom in Tibet and the return of His Holiness the Dalai Lama to Tibet.Chinese authorities appeared to be cracking down on current dissent across Tibet, with heavy punishments on protesters, and prison sentences for anyone involving in a self-immolation protest.