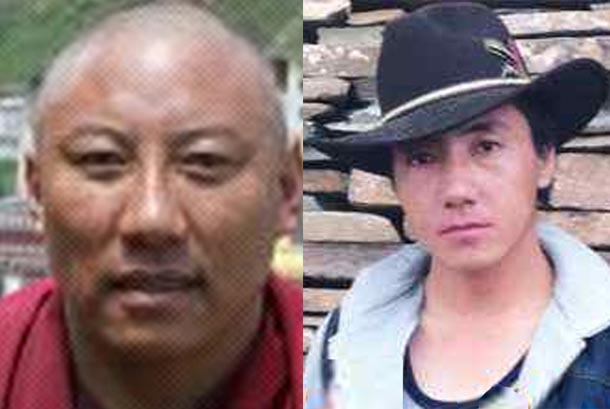 Dharamshala: - A Buddhist monk and a popular Tibetan singer had been sentenced to five years and six years respectively by a Chinese court in Siling (Ch: Xining, capital of Qinghai Province), Amdho region of eastern Tibet.

On 23 February 2013, Lobsang Jinpa, 31, a monk from Nyatso Zilkar Monastery was sentenced to five years in prison, according to Dharamshala based Tibetan Centre for Human Rights and Democracy (TCHRD). The monastery is located in Tridu (Ch: Chenduo) County in Kyegudo (Ch: Yushu) Tibetan Autonomous Prefecture, Qinghai Province.

same day, Lolo, 30, a popular Tibetan singer was given six years in prison, according to another source. Lolo was first detained on 19 April 2012 for releasing a music album that contained songs with politically-charged lyrics such as the well-known "Raise the Tibetan flag, Children of Snowland" (click here for English translation of the lyrics). After a brief detention, he was released but was detained again and sentenced on 23 February this year.

Lobsang Jinpa was detained on 1 September 2012, along with four other monks during a massive raid on Nyatso Zilkar Monastery by Chinese security forces. During the surprise raid, many monks were beaten and personal possessions of the five detained monks were confiscated. Sources said that that the September 2012 raid and subsequent detention of the monks were related to the 8 February 2012 peaceful protest staged by the monks.

Two of the five monks, Sonam Sherab, 41, and Sonam Yignyen, 45, were sentenced to two years in prison by a court in Siling (Ch: Xining) city, capital of Qinghai. The charges against the two remain unknown. Ngawang Monlam, 31, a disabled monk with leg problem, was detained for a month and released. Tsultrim Kalsang, 26, has spent the last few months recovering in a hospital from injuries sustained during his detention.

Sources said that Tsultrim Kalsang was severely beaten and tortured owing to which he had to be hospitalised. It is likely that he would be sentenced like fellow monk Lobsang Jinpa after he recovers from his illness.