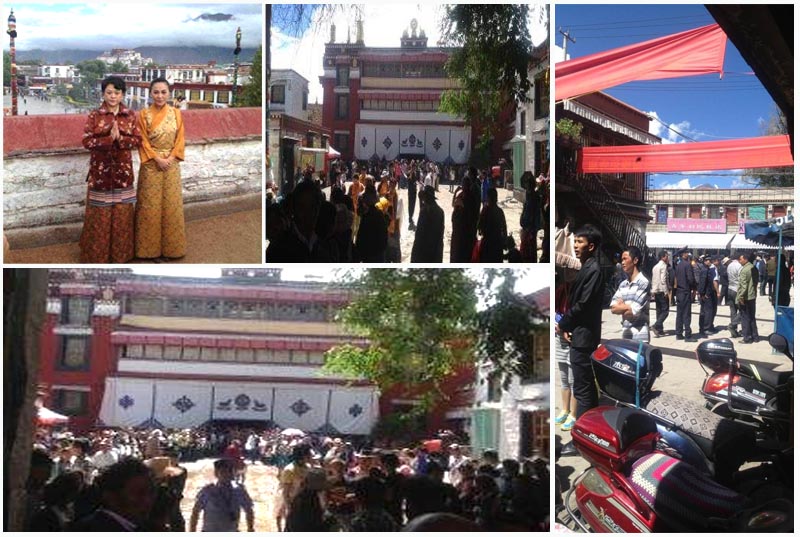 Dharamshala: - Arriving at Jokhang Temple in Lhasa, the capital of Tibet to experience a huge public gathering for the first time, as a daughter of a spiritual leader, Rigzin Wangmo and her mother were touched by a warm welcome by thousands of Tibetans.

Sources stated that "the 10th Panchen Lama Rinpoche's wife and daughter on June 20, 2013 secretly visited the Jokhang temple in Lhasa, the heart of Tibet, a crowd of thousands of Tibetan people immediately gathered to give them a warm welcome and support."

"Huge gathering of crows paid great attention to their pilgrim to the two holy sites- Jokhang Temple and Ramoche Temple in the capital," Sonam, a Tibetan currently living in Switzerland told The Tibet Post International (TPI), citing sources in the region.

"Tens of thousands turned out en masse to pay a warm welcome and respects to Rigzin Wangmo, the daughter of His Holiness the Xth Panchen Lama", who was a key Buddhist figure in the struggle to preserve Tibetan cultural and religious traditions and to promote Tibetan autonomy under Chinese occupation.

Sources said that many have expressed their sadness and disappointments, saying they couldn't see Rigzin Wangmo, as results of tighten security maintained by Chinese authorities.

The fear of huge public gathering, a large number of military personals immediately deployed in front of Jokhang Temple and near Ramoche Temple," source further added.

According to the sources, "during their visit at religious sites in Shitse township in Lhatse County, Central Tibet few days ago, local Tibetans greeted them with the same warm welcome and respect that they deserve."

His Holiness the 10th Panchen Lama was accused of being anti-Chinese and of engaging in counter-revolutionary activities. In 1964, he was removed from all public positions of authority. In 1966, the Panchen Lama was subjected to a series of 'struggle session' in Beijing. He spent the following 14 years in prison or under house arrest.

In 1982, he was finally allowed to return to Tibet, and soon after his return, he travelled widely in the three regions of Tibet – Amdo, Kham and U-Tsang – urging Tibetans to keep alive the spirit of Tibet in them, and to "Be Tibetan," and "Be for the Tibetan Cause."

During his last visit to Tibet in 1989, the Panchen Lama gave an extraordinary public speech in Shigatse where he publicly declared his loyalty to His Holiness the 14th Dalai Lama and openly criticized the Chinese leadership's policies in Tibet. Shortly after the address, the 10th Panchen Lama died in the Dechen Kelsang Phodrang in Shigatse, at the age of 51, under suspicious circumstances.

The 10th Panchen Lama's sudden death was a severe blow to the Tibetan nation. Although the cause of his death is uncertain, there has never been a public investigation.

In his lifetime, the 10th Panchen Lama was dedicated to fighting for religious freedom, improving education and acceptance of Tibetan as the official language, through both negotiations and open confrontation with the Chinese leadership. Thus, he is rightly remembered by the Tibetan people as one of Tibet's greatest martyrs.