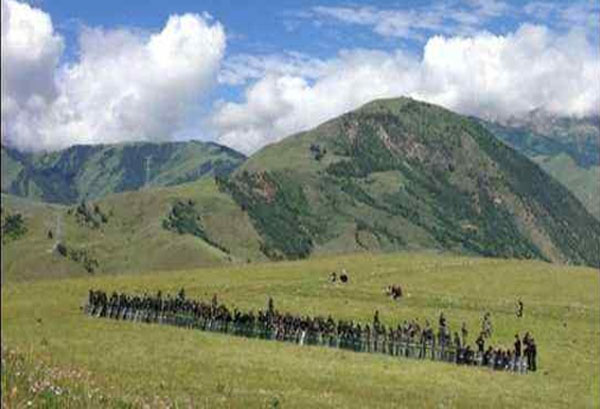 Dharamshala: On July 6, 2013, the morning of the 78th birthday of His Holiness the Dalai Lama, hundreds of Tibetans from Tawu joined monks from Nyitso Monastery and nuns from the Geden Choeling nunnery to offer prayers on a hill in the County. Within minutes of the assembly, People's Armed Police (PAP) surrounded the area interrupting the event.

Tear gases were open fired at the monks and nuns and several of them have said to been seriously injured. Jangchup Dorjee, a monk from the Nyitso Monastery and the younger brother of Palden Choetso, a nun from Geden Choeling nunnery who self-immolated on November 3, 2011, drove towards the area where he was attacked with stones by one of the PAPs smashing the windows of his vehicle. Jangchup Dorjee, Tsering Dhonudp and Tashi Sonam from Nyitso Monastery and Urgyen Tashi from Dakchu Town, Nyendak from Mikya town, Tashi and a nun from Geden Choeling Nunnery were open fired by the PAP. They're in a critical condition and have been receiving medical treatment at a local hospital. Urgyen Tashi has been moved to the nearest Chengdu hospital, his condition still remains critical.

Tawu Lobsang Jinpa, a former Tibetan Political Prisoner currently residing in Dharamshala said, "The situation remains tense. Large numbers of armed police have been deployed surrounding the Nyitso Monastery where no one is allowed to either enter or leave the premises."

"The fact that Tibetans in Tawu were open fired and stopped from celebrating His Holiness's birthday not only highlights the lack of freedom in Tibet but clearly discards the recent report on the change in China's policy allowing Tibetans in Tibet to openly revere His Holiness the Dalai Lama," said Tenzin Jigdal, Program Director of Students for a Free Tibet, India.

Three Tibetans in Tawu have self-immolated to date, the most recent one being Wangchen Dolma, a nun from Nyitso Monastery adding to the tragically long list of over 119 Tibetans who have self-immolated calling for the return of His Holiness and freedom in Tibet. And yet, the Tibetan crisis continues to remain neglected by the International community.