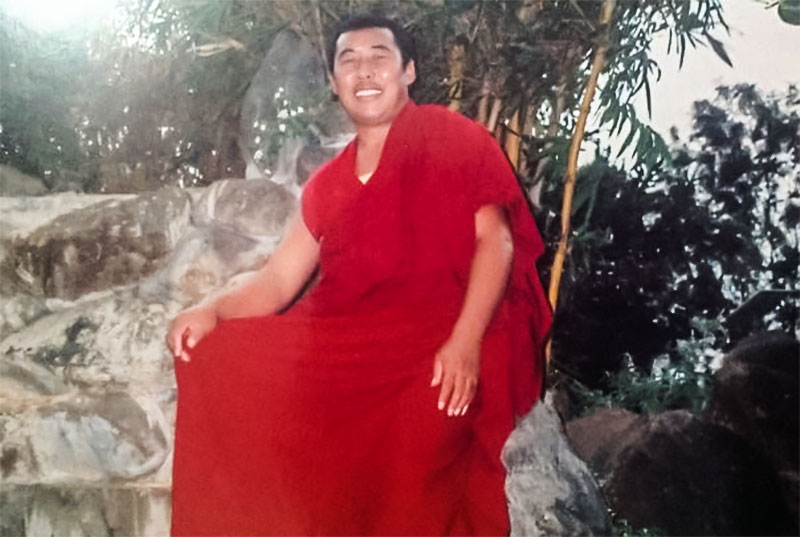 Dharamshala: - China's relentless crackdown in Diru (Ch: Biru) County in the name of Xi Jinping's 'mass line' policy has claimed another Tibetan life, even as sources from Tibet continue to report on increasing number of arbitrary arrests and secret detention.

According to a report the Tibetan Centre for Human Rights and Democracy (TCHRD), a senior Tibetan Buddhist scholar known for his keen intelligence and mediation skills died while being detained in police custody. Ngawang Jamphel, 45, was among the three monks from Tarmoe Monastery who were detained on 23 November 2013 while on a vacation in Lhasa. The second monk has now been identified as Kelsang Choklang (see photo) while the identity of the third monk remains unknown as he continues to be secretly detained. Kelsang Choklang's whereabouts remain unknown.

The report said that on 17 December 2013, less than a month after his secret detention, Buddhist scholar and master Ngawang Jamphel died following which the police lost no time in handing over the body to Ngawang Jamphel's family. "It was clear that Ngawang Jamyang was beaten to death while in secret detention. He was a healthy, robust man when he left his monastery to visit Lhasa, said the source.

Ngawang Jamphel has become the latest addition to the long and growing list of well-informed and educated Tibetans who are being targeted by Chinese authorities. Other sources in Diru told TCHRD that since 2008, Chinese authorities have systematically targeted educated Tibetans, thus silencing the most articulate voices representing the suffering and aspirations of the Tibetan people. For instance, Topden, the nomad and writer from Diru who was sentenced to five years in prison for writing a poem had written about the arrests of educated Tibetans: "By arresting all educated Tibetans/Freedom of mind, body and speech is denied."

The source said family members took Ngawang Jamphel's body to the cremation ground at Sera Monastery in Lhasa. Prayers and other rituals are being organized at the deceased's home in Diru County.

The source also said that the police have threatened the deceased's family not to speak about Ngawang Jamphel's death to others. "They [police] have issued threats that the family would meet the same fate if the news about the custodial death get out of Tibet."

After their arrest, a large number of troops descended on Tarmoe Monastery, and armed police undertook forcible searches all over the monastery including Ngawang Jamphel's residence from where the police seized two laptops, said the source.

Ngawang Jamphel born in 1968 in Yulto Tho Village in Tsachu Township, Diru County. In 1987, he became a monk and joined Tarmoe Monastery in his hometown. In 1989, he left for India to pursue further studies at Sera Je Monastery in south India. He had also worked as a personal assistant of Shabdung Rinpoche Tenzin Khedup, a highly-respected reincarnated lama from Diru who now lives in exile in India. For 19 years, he engaged in vigorous study of both Buddhism and modern sciences. He was a first-rate student at his monastery and managed to perform better than most monks during exams. During his Geshe Karampa (equivalent to Bachelor's degree in Buddhism) exams, he secured second and third positions in two consecutive years. In 2007, he returned to Tibet.

In 2008, he was imprisoned for two years on charges of "leaking state secrets". After release, he worked for sometime as a teacher of Buddhist Dialectics at Choeling Monastery. At Tarmoe Monastery, which has now been temporarily closed due to crackdown since 23 November 2013, Ngawang Jamphel founded a Buddhist Dialectics class where both monastic and lay people could attend and learn. He used to give free teachings on Tibetan Buddhism and culture to monks and local Tibetans. He is known for his numerous social welfare activities such as helping to peacefully mediate between disputes and helping local Tibetans particularly the youngsters to shun harmful habits such as gambling.

Ngawang Jamphel, Kelsang Choklang and an unidentified monk from Tarmoe Monastery from Diru disappeared in late November 2013 following their arrest in Lhasa where they were spending their holidays.

At the moment, Tarmoe monastery and nearby villages have been surrounded by Chinese security forces. The monastery is closed indefinitely. Local Tibetans fear that after Ngawang Jamphel death, it would be difficult for Tarmoe Moanstery to function as efficiently as before. "He [Ngawang Jamphel] was the most efficient administrator, teacher and a very conscientious person. Tarmoe would never be the same again without him," the source told TCHRD quoting local Tibetans.

The Chinese security forces have also surrounded Rabten and Drong Na monasteries in Diru, and have detained eight monks belonging to Rabten Monastery, who had earlier studied in Pelyul, Sershul, and Serthar Buddhist institutes in Kham province (Sichuan).

In fact since last month, the provincial and county authorities have increased the number of local cadres [who have been decreed to work with the masses], thus stepping up government propaganda and repression in the area.

The source said that Chinese authorities are of the view that Diru suffers from the lack of political stability and that if Di Ru county is not pacified, it will have its 'negative' impacts on other Tibetan areas.

The source further said that the Chinese authorities, as a result, assert that Tibetans in Diru must be subjected to 're-education campaigns' day in and day out. Towards this end, the authorities have organized meetings and issued orders to the monks belonging to various monasteries in Diru to return to their homelands from their study centers outside of Diru, in provinces like Qinghai and Sichuan.

Further, the monks who once studied in India and in the provinces of Qinghai and Sichuan are subjected to intense 're-education' sessions.

The monks of the Tarmoe monastery have returned to their homes for a one-month winter holiday. The Chinese cadres therefore had to interrogate the few remaining monastic staffs at the monastery such as the caretaker and watchmen regarding the whereabouts of the monks.

The security forces also surrounded the villages and families of the monks; some of the security forces wearing dark uniforms barged into the houses [of monks' family homes], confiscating items such as mobile phones, satellite dishes, small boxes, photographs, old knives and other miscellaneous items.

When the local cadres ordered the monastic staffs to open the doors of the monks' rooms, they responded by stating that they would open them up only when the security forces release the monks and local Tibetans who were earlier detained for no particular reason.

In the last three months, a few hundred Tibetans from Diru have been arrested and sentenced to prison. Many of them have disappeared.

The source said local Tibetans in Diru consider 2013 the worst year as far as Chinese oppression is concerned. Such intense Chinese repression has never been seen in the area since 1969, when many Tibetans from Di Ru, Khyungpo Tengchen, Chagra Palbar and other areas were massacred by the Chinese troops.