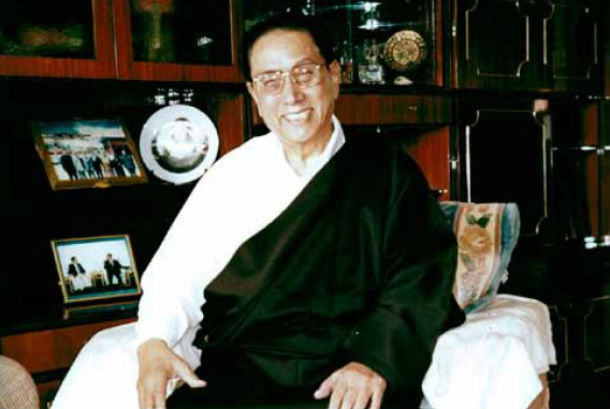 Dharamshala: - Phuntsok Wangyal (known as Phunwang or Phuntso Wangye), a veteran Tibetan Communist leader who became an outspoken critic of Chinese government's hardline policies towards the people of Tibet, died on Sunday, 30 March, 2014, his son told Reuters. He was 91.

"He left this morning," Phuntsok's son, Phunkham, told Reuters. "Before his death, he was a Communist Party member. After his death, we have invited lamas to pray (for his soul) according to traditional Tibetan culture."

Phuntsok, who was in a Beijing hospital since July, recently developed lung problems.

Born in 1922 in the Tibetan county of Batang, now part of China's Sichuan province, Phuntso founded the Tibetan Communist Party and launched a series of guerrilla uprisings against Nationalist Chinese rule until joining forces with the Chinese Communist Party in 1949.

He led China's People's Liberation Army troops into the remote mountain region in 1951 and served as translator for Chinese leaders Mao Zedong and Zhou Enlai during talks with the Dalai Lama in 1954. Phuntso was later purged and spent 18 years in solitary confinement before being rehabilitated in 1978.

According to his biographer Melvyn Goldstein, Phuntso said while his years at the notorious Qingchen Prison brought hardships that were "beyond description", they let him escape an even worse fate during what he called China's "chaotic" Cultural Revolution.

Later, Phuntsok turned down the opportunity to be chairman of the Tibet regional government, and became increasingly critical of Beijing's position on Tibet and the Dalai Lama, who fled into exile in India in 1959 after an abortive uprising against communist rule.

Phuntsok wrote a series of letters to then-President Hu Jintao condemning local leaders for using the campaign against "splittism" in Tibet to serve their own political ambitions and for refusing to acknowledge the role played by His Holiness the Dalai Lama in Tibetan society.

He urged Hu Jintao to allow His Holiness the Dalai Lama to return to his homeland, saying this would help make the region stable.

Phuntsok also urged President Xi Jinping recently, to reconsider China's stance towards Tibet and had hoped the Chinese leadership could hold talks with His Holiness the Dalai Lama and let His Holiness Dalai Lama return to Tibet.