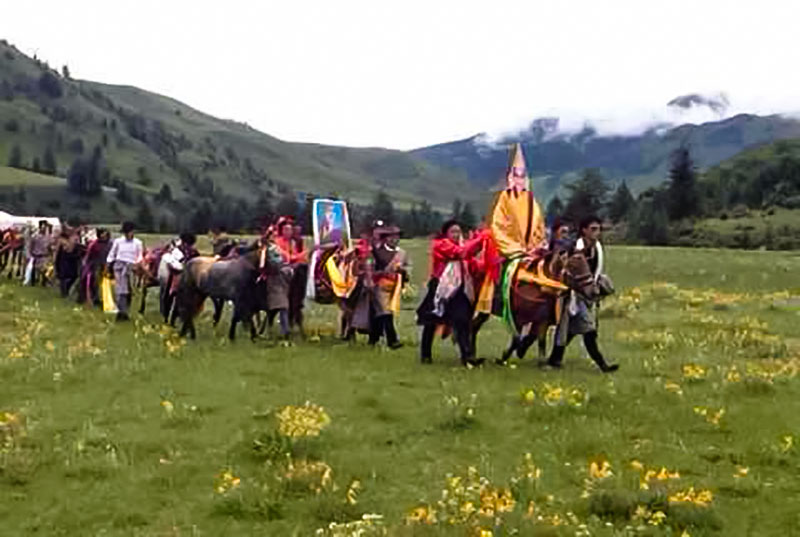 Dharamshala: - Sources coming out of Tibet say His Holiness the Dalai Lama's 79th birthday was celebrated in different parts of Tibet despite heavy restrictions imposed by the Chinese government, including a ban on cultural festivals and an intensified deployment of armed Chinese troops in the region.

Despite China's ban, Tibetans displayed portraits of the spiritual leader of Tibet, His Holiness the Dalai Lama, and other high-ranking spiritual leaders at a traditional horse-racing festival in Bathang County, in the east of Tibet this week.

'The Bathang horse racing festival is a traditional festival that was held on July 27 in high-elevation Bathang County in the Kham region of eastern Tibet (Chinese: Batang county in Ganzi). The festival was opened with the hosting of a large portrait of His Holiness the Dalai Lama, also displayed were portraits of 10th Panchen Lama, 17th Karmapa, and Sakya Trizin,' an exiled Tibetan told The Tibet Post Int'l (TPI).

Another source told TPI that 'Tibetans from Lithang Golok areas in Nyakchukha County also held a horse racing festival this week; the hoisting of prayer flags and thousands of wind-horse leaflets on sacred mountains and the displaying of portraits of His Holiness the Dalai Lama and Tenzin Delek Rinpoche occurred in their camp during the festival. They performed the traditional lha sol ritual - throwing tsampa (roasted barley flour) in the air and burning incense in celebration of the birthday.'

His Holiness the Dalai Lama's 79th birthday was clebrated in many other parts of Tibet over recent weeks, despite tightened security restrictions including a ban on the traditional religious and cultural festivals in Tibet and an intensified deployment of troops in many areas.

'Large portraits of His Holiness the Dalai Lama displayed in many areas in Amdho and Kham regions of eastern Tibet during picnics in the grasslands, horse races, hoisting of prayer flags on sacred mountains and burning of incense,' sources said.

'Tibetans gathered at the festival in Bathang on 27 July having offered their traditional scarves to the portrait of His Holiness the Dalai Lama after which the organizers placed it on a throne,' sources said.

Sources also stated that 'the crowd gathering reportedly offered prayers for His Holiness the Dalai Lama's long life and that of other Tibetan spiritual teachers. They also prayed for a peaceful resolution of the issue of Tibet.' 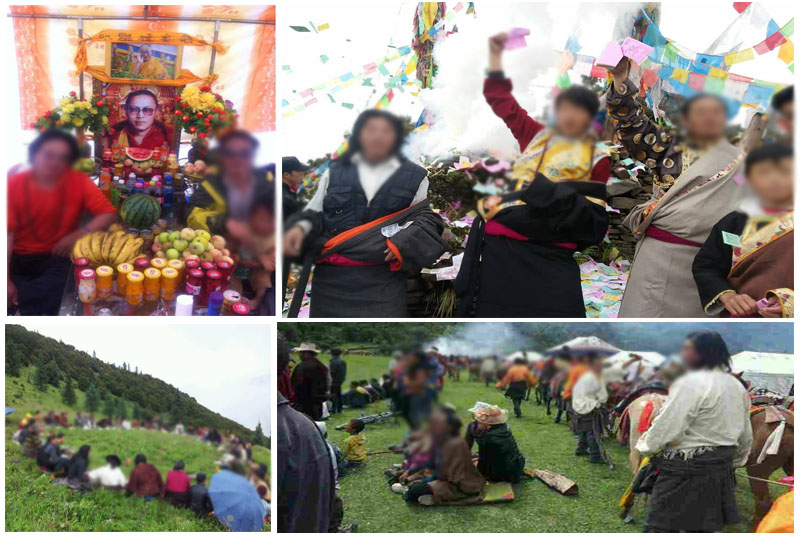 Tibetans Lithang, Drakgo also marked His Holiness' birthday on July 6 and displayed images of His Holiness the Dalai Lama, burnt incense and made prayer offerings.

His Holiness' birthday also celebrated in Tawu county in Kham region on July 6, with incense burning and hoisting of prayer flags.

In Amchok, the Tibetan area of Amdho, His Holiness' birthday celebration was held with a traditional horse racing festival. Tibetans wearing traditional costume walked to a sacred mountain where they were draped with white blessing scarves and prayer offerings were made. Monks from Labrang Tashikyil Monastery in Amdho chanted long life prayers for His Holiness in the grasslands beyond the monastery.

Recent years have witnessed an unprecedented interest among the Tibetans inside Tibet to celebrate His Holiness the Dalai Lama's birthday, sources said.

In Lhasa, the capital of Tibet restrictions were tightened over the sensitive birthday period, with Chinese armed troops deployed in Barkhor areas, site of the Jokhang Temple, and Norbulingka, His Holiness' former summer palace.

Social networking services were also blocked in many areas of Tibet, possibly with the intention of preventing Tibetans from hearing news about the 33rd Kalachakra and the teachings held in Ladakh from July 03-14, 2014.

Traditional celebrations to mark His birthday on 6 July, known as "Trunglha Yarsol" in Tibetan, have been officially banned throughout the 1990s.

The Chinese authorities issued a public notice in June 2001 reinforcing the ban on celebrations of His Holiness' birthday in Lhasa, the Capital of Tibet, stating that Tibetans were not permitted to "give prayers and blessings" for their spiritual leader or to "eulogise his merits and virtue".

In the public notice the authorities focus on the "consolidation of the achievements" made in banning the "illegal activities of Trunglha Yarsol" - a reference to the security measures that have been implemented over the past 15 years to crack down on the celebrations.

Restrictions on Trunglha Yarsol were tightened in 1999 when an incense-burning stove normally used for the birthday celebrations in the eastern suburbs of Lhasa was reportedly destroyed by the authorities and access to the site was blocked.