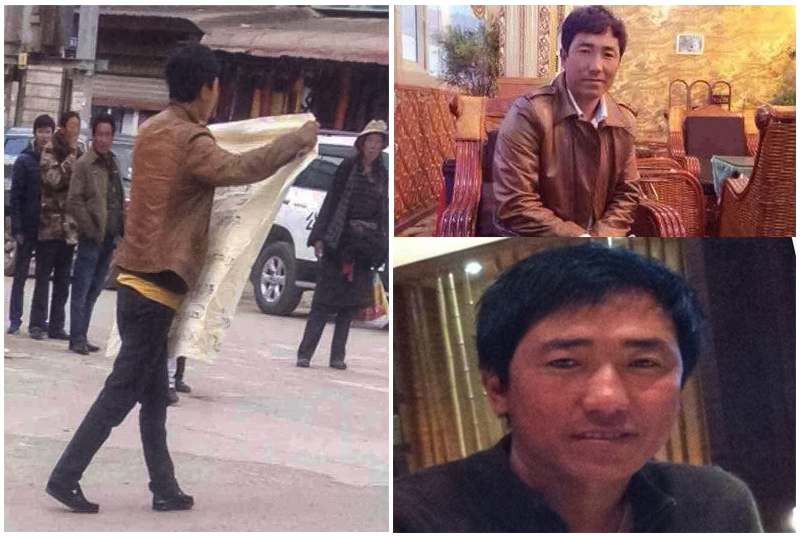 Dharamshala: — Chinese police officials have detained a Tibetan man in Karze County, Kham Province of eastern Tibet for staging a lone protest against Chinese repressive policies in the region.

"Wangchuk staged his peaceful protest against the decades of repressive policies in Tibet carried out by the Chinese Communist government, while raising his banner to a huge crowds gathering around the main street," the source added.

He also shouted slogans of "long life for His Holiness the Dalai Lama, his return to Tibet and freedom for Tibetans and condemned the Chinese repression in his homeland as he marched along the main street towards the Chinese government buildings in the county.

"Holding a white banner that reads: "human rights, and freedom in Tibet and the return of His Holiness the Dalai Lama to his homeland, Wangchuk shouted slogans against Chinese rule," the sources told TPI, adding: "The man, who is a father of three and a businessman."

According to local sources, 'Wangchuk was arrested by the police after marching about ten minutes in the street, where the last decades have seen continuing peaceful protests by Tibetans. Sources continued that his current condition and whereabouts remain unknown.

The protest however lasted only a short while. But, the sources in contact with locals in the area said his protest drew a large crowd of local Tibetans, was noticed by Chinese police who immediately arrest him and took him away.

'He is one of the great patriots, who normally cares about Tibetan people while engaging in various charity activities. He is an outspoken critic on the lack of freedom in Tibet and he never feared to express himself,' sources said.

Born in 1977, Wangchuk or Ngodru is a famous businessman from Buchu Yarkhab village in Serchu Township in Kham Karze County. He has a wife called Sonam, two daughters and a 5-year old son. They currently live near a Tibetan temple called "Degonpo Tsuglagkhang" in Karze town. His father's name is Chowang Gyatso and mother's name Ringa.

Conditions for foreign journalists reporting Tibet have gone from bad to worse over the past years as the authorities have imposed a heavy restriction on them to enter the Himalayan region.

It is also extremely difficult to receive local reports from Tibet and the fate of many more remain unknown due to the restrictions on communication lines in most parts of the region.

The authorities in Beijing reportedly seeking to influence coverage by intimidating reporters and their interview subjects, barring journalists from large portions of China or by withholding visas and blocking the websites of overseas news outlets.

The government has made it increasingly difficult for the reporters to conduct interviews in the so called Tibet autonomous region, as well as to Tibetan areas in Gansu, Sichuan and Qinghai Provinces.