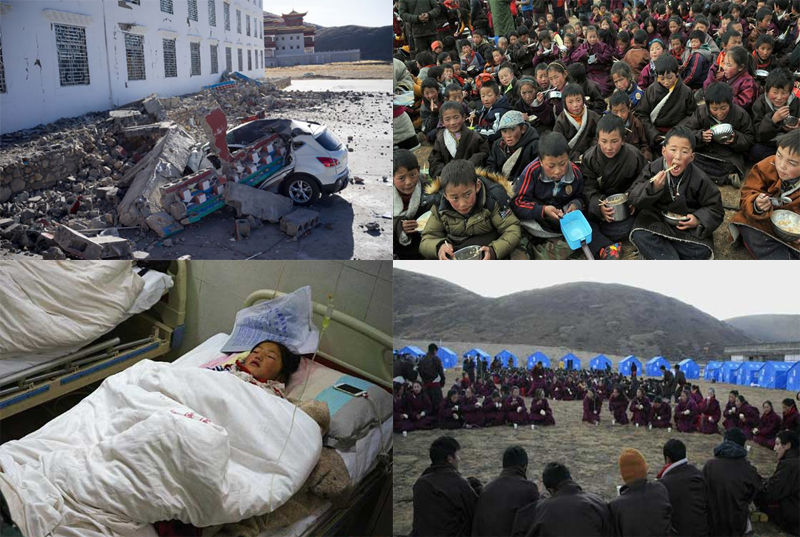 Dharamshala: - Three people were injured after a 5.8-magnitude earthquake struck Dhartsedho County in Kham region of eastern Tibet on Tuesday, November 25. It follows another earthquake that struck the same area at approximately 4pm on Saturday, November 22.

Saturday's earthquake was reported to be a magnitude of 6.3 and 5 people were killed. The number of injuries following Tuesday's quake has brought the total till Saturday to 68.

The majority of the 129,320 people living in Dhartsedho (Chinese: Kangding County, Ganzi Tibetan Autonomous Prefecture) and the surrounding counties are Tibetan.

There was very little damage caused by the quake on Tuesday but damage after Saturday's quake was far more severe with 26,000 houses damaged and 79,500 people reported to have been affected.

Kangding's regional airport also sustained some damage but flights were not disrupted. The Civil Aviation Administration of China said on Saturday that it was making thorough checks of Kangding airport as well as the neighbouring Jiuzhai Huanglong and Daocheng airports. Although operations have been unaffected.

The Xinhua News Agency reported that part of the highway connecting Sichuan and Tibet caved in following the quake and trapped about 100 vehicles. Railway services were halted in the area while workers checked for damage to the line.

In the town closest to the epicenter, Pa Lhagang (Chinese: Tagong), a statue of Buddha in a local temple was also damaged.

In a statement on Monday the Chinese Finance Ministry announced that the central government would release an emergency relief fund of 50 million Yuan for those affected. The money is to be used for relief efforts including emergency evacuations and to support with reconstruction of damaged homes.

A total of 9,184 residents have been evacuated and 999 medical staff members have been sent to the quake-affected areas. Relief efforts includes dispatching tents, quilts, clothes and shoes were to affected people.