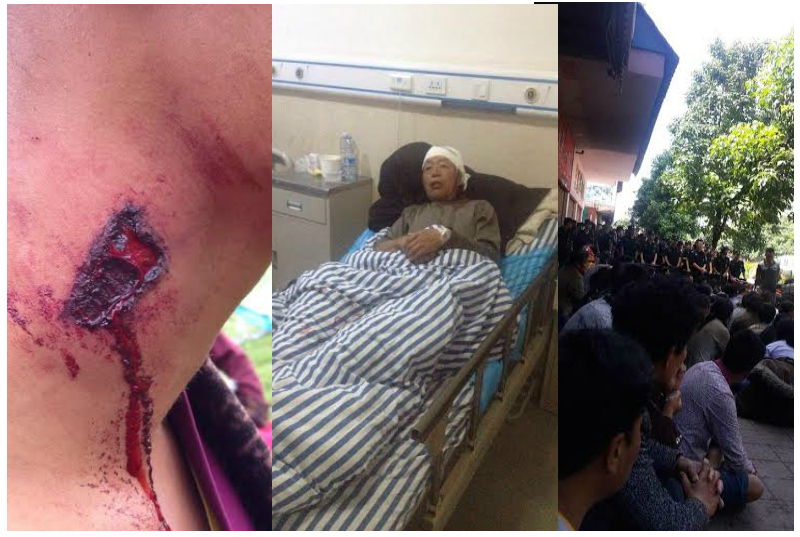 Dharamshala — At least 15 Tibetans including five aged persons were admitted to hospitals after they sustained grievous gunshot wounds in the indiscriminate firing by Chinese police authorities in a public demonstration held in Nyachuka on Monday, July 13. Several others also sustained minor injuries after the authorities opened fire. The photographs of the violence meted out on the protestors began to trickle down into exile soon after.

A day after the Chinese prison authorities notified the death of prominent Tibetan political prisoner, Tulku Tenzin Delek Rinpoche, several hundreds of Tibetan protestors, both young and old, had taken to the streets in front of the local administrative office at Othok Township in Nyachukha County, to mourn his death in prison.

Following the demonstration, a large number of security forces have been deployed in the area and the road to and from Lithang and Nyachuka has been blocked to restrict movement of local people.

Meanwhile, hundreds of monks have been simultaneously holding a sit-in protest in front of the Chuandong prison in Chengdu, demanding the release of Rinpoche's body for last rites. Rinpoche, 65, died under mysterious circumstances on Sunday, 12 July, while serving a life sentence in Chuandong prison in the southwestern Chinese Provincial city of Chengdu.

Tibetans and human rights groups have maintained that the charges leveled on Rinpoche by the Chinese government was a politically-motivated fabrication to undermine his efforts towards environmental conservation, educational development and cultural preservation.

In fact, in a substantive report published by Human Rights Watch in 2010, it was stated that: "The case of Tulku Tenzin Delek Rinpoche was a culmination of a decade-long effort by Chinese authorities to curb his efforts to foster Tibetan Buddhism, his support for the Dalai Lama as a religious leader, and his work to develop Tibetan social and cultural institutions.

His efforts had become a focal point for Tibetans struggling to retain their cultural identity in the face of China's restrictive policies and its continuing persecution of individuals attempting to push the accepted boundaries of cultural and social expression."