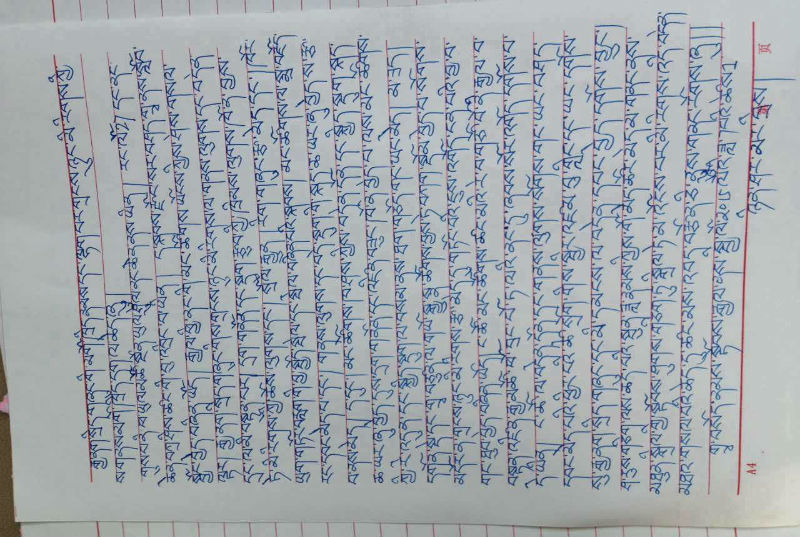 Dharamshala — Eight days before Tibetan monk Sonam Topgyal, 27, set himself on fire on Thursday, July 9, he had written his testament, revealing the deep rooted oppression that was meted out to him and his fellow Tibetans by the Chinese government.

Soon after he immolated himself, there was a security clampdown around the central square of Kyegudo in the Yulshul (in Chinese, Yushu) Tibetan Autonomous Perfecture, where the incident took place. Communication and internet channels in the area were also disrupted.

The content of the testament was made available to The Tibet Post International from a source living in Switzerland, shared on the condition of anonymity.

“To the leaders of the Chinese Government and particularly to the local heads of the minorities, I am the 27-year-old son of Tashitsang of Nangchen, Yulshul in Tsongon region. Currently, I am a monk studying at Dzongsar Institute.

As people within the country and outside are aware, the Chinese government does not look at the true and real situation of the minorities, but practices only harsh and repressive policies on them.

At a time when the government is carrying out policies to stamp out our religion, tradition and culture, and destroy our natural environment, there is absolutely no freedom of expression for the people, and there is no channel to talk about our situations and file our complaints.

Moreover, every time the people try to report the truth about their situation and file any complaint, the authorities, instead of providing solutions, bring out more crackdowns and arrests on them. Through various deceptive policies, the government also prevents monks and nuns from joining religious institutions. In a nutshell, they are carrying policies to completely wipe out the minorities.

Our chief goal is for His Holiness the Dalai Lama to be able to return to the Potala Palace. I am sacrificing my life to prove to the world and especially the people of China and the Chinese authorities that as Tibetans, we have absolutely no power or channel to talk about the injustices meted out on us.

My Tibetan brothers and sisters of the same blood, I plead you to not remain aloof as if you have not seen or heard anything. Be united and stay strong to work hard for our just struggle to win in the end.

Written on July 1, 2015 just when the sun rose
Sonam Topgyal”