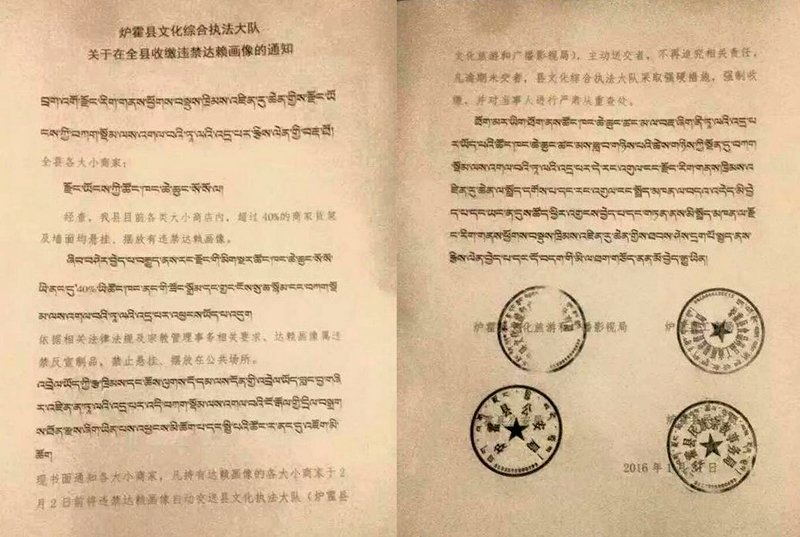 Dharamshala — Chinese authorities in Drakgo County, Kham region of eastern Tibet (Ch: Tongren County, Qinghai province, northwest China) have issued a two-page notice related to photos of His Holiness the Dalai Lama. People who failed to comply by February 2 were undermining the law.

Tibetan shopkeepers in Drakgo County, eastern Tibet (Ch: Luhuo County, Ganzi Tibetan Autonomous Prefecture) have been ordered by Chinese authorities to hand over all photos of His Holiness the Dalai Lama. "Anyone violating these directives will be severely punished according to the law," Ngawang Chenrab told the Tibet Post International, citing local sources.

The order, which was issued on January 4, by three local government departments in the Drakgo County says that the photos can also no longer be displayed in shops or stores serving the public.

"If any shop possessed photos of the Dalai Lama and displayed these before the date of this notice, these should be voluntarily surrendered to the Draggo County Office of Culture and Discipline by February 2," the notice read.

The source also revealed that the new notice stipulates: "Those who delay in handing these over, or who never turn them in, will be severely punished according to the law," the notice reads.

The notice clearly shows the systematic compromise of the human rights of the Tibetan people by the Chinese government. "After conducting an investigation, the authorities said that an estimated 40 percent of the county's shopkeepers have displayed His Holiness the Dalai Lama's photo," it said.

The Chinese government's decision to ban the public showing of any photographs of His Holiness the Dalai Lama began in 1999. The major monasteries were told that possession of the Dalai Lama photographs or public celebrations of his birthday have been met with harsh punishment in the past.

Over 140 people, including several Buddhist monks and nuns committed self immolations in the last few years protesting the Chinese rule in Tibet and calling for return of their spiritual leader, His Holiness the Dalai Lama.

China began running Tibet after the military invasion of Tibet in 1949, assuring that freedom of Tibetan people would be respected. But Tibetans say the Chinese went back on their word, forcing His Holiness the Dalai Lama to flee Tibet in 1959. Since then, Tibetans have launched an international campaign against the "occupying" Chinese government that continues to face criticism for alleged human rights violations in suppressing the Tibetans in Tibet.