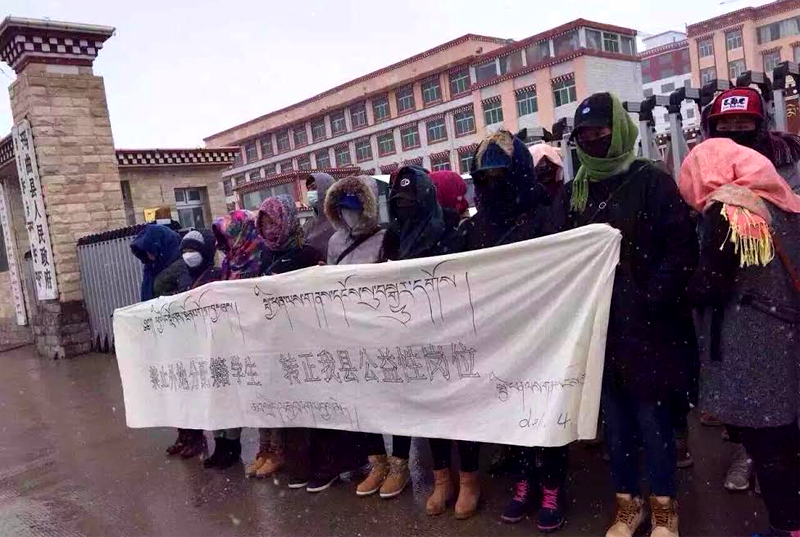 Dharamshala - Over sixteen young Tibetans were detained in Marchu County of Tibet's Amdo Province where they staged a peaceful protest the local Chinese government over job discrimination against Tibetans.

The arrest came after a group of Tibetan graduate students in Marchu County in Gansu Province (traditionally in Tibet's Amdo Province), on Friday, April 8, 2016 staged protest against the Chinese government over job discrimination against Tibetans students and favoritizing "outsiders."

Sources said that the local Chinese government has recently issued a notice to several offices, include the forest department, saying that the graduate students will no longer be allowed to work in government offices in the County. Most of the Tibetans worked for 3-4 yrs at these various government offices.

As a result, they were disadvantaged by not being assigned a job from the government, because of their education qualification as an excuse. Authorities abusing their positions and appointing graduates from outside the area. Examinations for public servants being conducted unfairly or unjustly, disadvantaging Tibetans who have been working for the government for 3-4yrs.

Photographs received by the TPI also show a group of at least 15 Tibetan university graduates risk arrest to protest job discrimination. In front of a local government building, they carried a large banner saying "Stop outsiders, it needs to change, the government jobs that should be beneficial for all. We haven't broken the law."

Their complaint alleges that the local government is discriminating against minority students by punishing them more frequently and more harshly and favoritizing people from other areas.

The protesting graduates were reported to fear that local officials take bribes or seek other advantages in return for appointing graduates from other areas, the sources said, adding: "Since their arrest, their conditions and whereabouts remain unknown."

it's not the first time the unemployed Tibetan graduates have protested against Chinese government over corruption and jobs discrimination. Dozens of Tibetans staged a public protest gather outside government buildings in Marchu County, north- eastern Tibet, on 10th April, 2013 where they handed out leaflets explaining how they are disadvantaged when it came to finding work.

Local Tibetans say the language of business and higher education is Mandarin in Machu County, north-eastern Tibet (Ch: Tibetan Autonomous Prefecture in Gansu Province, China), making it easier for Chinese immigrants to take the best jobs and forcing Tibetans to adopt the language of the occupying power in an attempt to overcome economic disadvantages. The unemployed Tibetans have risked detention, beating and imprisonment to stage a public protest for several times over their failure to find jobs.