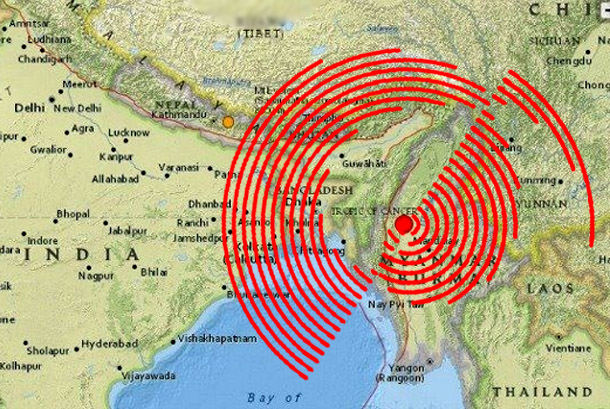 A wide stretch of Southeast Asia was rocked Sunday morning by a powerful jolt that left at least people 26 dead and caused significant damage around the epicenter in northern Myanmar.

Officials said 12 others were missing and 230 were injured. The 6.8 magnitude shaking collapsed a bridge and a gold mine, and damaged several old Buddhist pagodas.

Hundreds of other buildings were also wrecked by the temblor, which sent terrified residents running from their homes in the country's second-largest city of Mandalay and surrounding communities. Several strong aftershocks jolted the region after the initial quake struck at 7:42 a.m. local time.

State-run Xinhua news agency said the tremors were felt in Lhasa, the capital of Tibet. There were no immediate reports of injuries or damage. Strong tremors, lasting for about a minute, were felt in Tibet after a 7.2-magnitude quake hit Myanmar on Wednesday.

The earthquake has struck Myanmar, the several reports, with shaking felt across the region, including India and Tibet. Shaking was also felt as far away as Bangkok in neighboring Thailand.

The earthquake also shook several parts of northeastern India, as also West Bengal, Bihar, Jharkhand and even Delhi, the Indian capital and Dharamshala in Himachal Pradesh.

This earthquake occurred at intermediate depth, according to the US Geological Survey, which means it took place within the Indian tectonic plate as it subducts beneath Eurasia.

Residents were seen rushing out of their houses. According to Xinhua report, a 7.2 magnitude quake jolted Myanmar on Wednesday. The epicentre was at a depth of 130 kilometres, the centre said in a statement.

In March 2011, at least 75 people died when another powerful temblor hit Myanmar near the borders with Laos and Thailand.