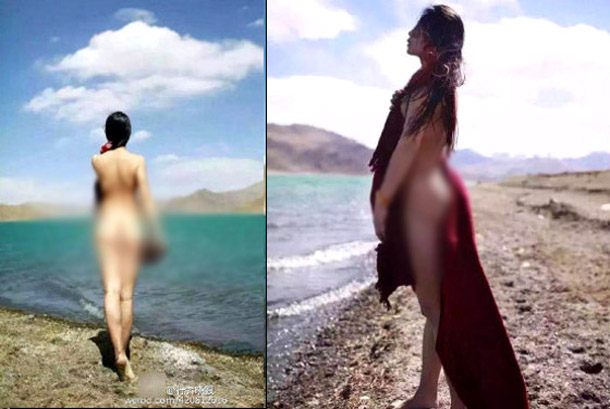 Dharamshala — After several nude photos of a Chinese woman went viral on Weibo, a Chinese social media, Tibetan netizens strongly condemned her for disrespecting Tibetan culture and the Tibetan way of life.

The controversial images were spread online after a Tibetan woman posted them to her Weibo blog on Monday night. Many netizens agreed with her, saying what the woman did disrespected Tibetan culture, igniting another controversy.

They show the woman posing for pictures around the Yamdrok Yumtso Lake, one of holiest lakes in Tibet, located about 100 kilometers from Lhasa, the capital of Tibet. However, the Chinese authorities have not responded again.

They said that this is not the first time a Chinese woman attempted to disrespect the Tibetan way of life and disrespect to the dignity of Tibetan people. There were several pictures that showing Chinese visitors with bad manners are a fairly common sight, making themselves aggressive and culturally insensitive.

No matter whether its a statue of Buddha, or a sacred place to the Tibetans, many Chinese tourists never stopped to behave aggressively in Tibet.

Many critics say that the Chinese government has made no effort to help Chinese people understand or respect Tibetan culture. This is what is happening not only in Tibet, but Chinese tourists are behaving badly around the world, according to multiple media reports.

Chinese tourists have been getting such a bad name for themselves that the government released a tourism law in 2013 that called on its citizens to mind their manners on holiday.

However, in 2015, a series of photos showing a nude model posing in the Capital City of Tibet has sparked heated online debate. But, the Chinese authorities have not responded accordingly.

These photos were posted on Weibo by Wang Dong, a Chinese photographer, on May 17. The photos show the Chinese nude model straddling a stone slab and posing with a stone pillar.

Even many Chinese netizens criticized the photos for 'tarnishing the solemnity of the Tibetan holy city and corrupting public morals.' But Wang Dong said it is natural to take nude portraits at tourist attractions. Wang she shamelessly said: "I do not intend to deliberately defame any culture or civilization."

Though not officially acknowledged, China is today home to 300 million Buddhists thus making it the country with the world’s largest Buddhist population.