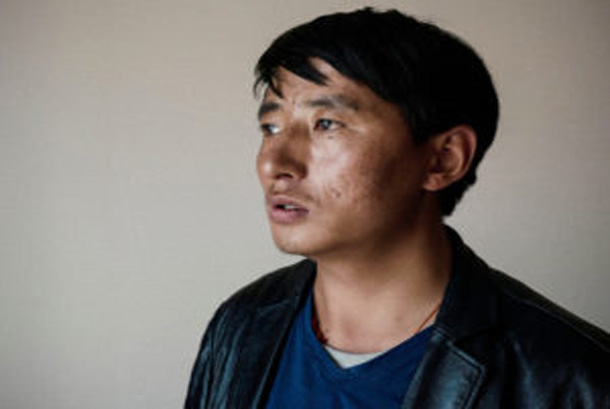 New York – Following an interview with the New York Times, a Tibetan man has been imprisoned on false charges, according to his lawyer.
Tashi Wangchuk, 31, has been detained by police in his home area of Jyegudo (Chinese: Yushu) in Qinghai since January 2016, following an interview with the New York Times on Tibetan culture and language, published as an article and video in November, 2015. He faces charges of ‘separatism’, although he has not advocated Tibetan independence, according to his attorney.
His lawyer, Liang Xiaojun, said: “All he wants is to try to preserve Tibetan culture.” His arrest followed a video by the New York Times that documented his journey to Beijing in 2015 to try to file a lawsuit against Yushu officials for not properly supporting the Tibetan language.
The Tibetan language – bedrock of Tibetan culture, religion and identity – has been steadily undermined under Chinese rule over the past six decades. Chinese authorities have marginalized Tibetan language by withdrawing it from school curriculum and instead focusing on the dominance of Chinese language.
Primary reliance on the Tibetan language creates serious obstacles for Tibetans in terms of their further education, jobs and income in the Chinese-run system. Research shows that children do better when the language acquired from birth is the teaching medium. While primary-level classes are still taught in Tibetan in many Tibetan areas, instruction as higher levels is in Chinese in all subjects other than Tibetan language classes, meaning that Tibetans find themselves at an educational disadvantage. Tibetans want to learn Chinese, especially as college entrance exams are only in Chinese language, however it has come at the expense of nearly losing their mother tongue.
Tashi Wangchuk told the New York Times that one of the reasons he sought to highlight the importance of language was because he could not find a place where his two teenage nieces could continue studying Tibetan, after officials forced an informal school run by monks in his area to stop offering language classes for laypeople. Officials had also ordered other monasteries and a private school in the area not to teach the language to laypeople. And public schools had dropped true bilingual education in Chinese and Tibetan, teaching Tibetan only in a single class, like a foreign language, if they taught it at all.
In 2010, when proposals were introduced to increase Chinese-language medium teaching and undermine Tibetan language study, hundreds of students and schoolchildren joined protests in Qinghai. There were further demonstrations in 2012, when the proposals were adopted in the form of a teaching system that almost eliminated Tibetan as a language of instruction in primary and secondary schools.
Prior to his arrest, Tashi Wangchuk sold goods in a shop in Yushu and online. According to information from his lawyer cited by the New York Times, the police concluded an additional investigation at the prosecutors’ request on August 25th, and prosecutors now have 90 days to decide whether the case should go to court.