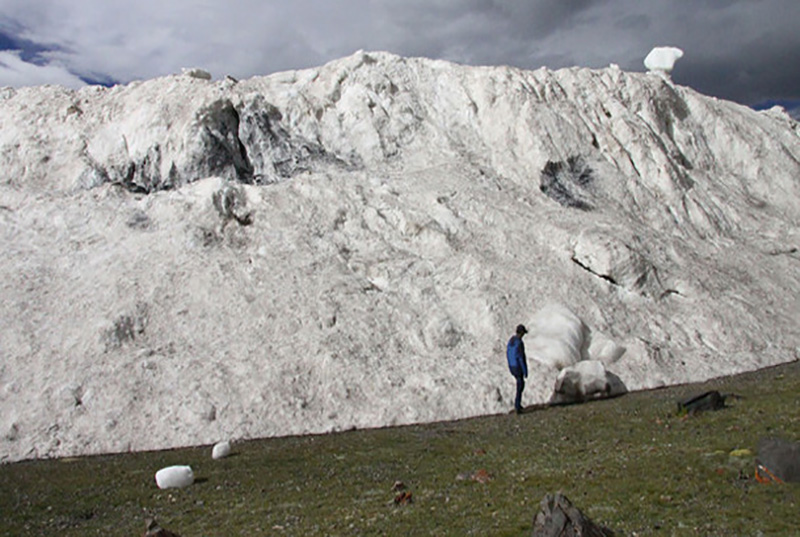 Dharamshala — A deadly avalanche that dumped 70 million tons of ice into a valley below the mountains of western Tibet this summer was likely the result of climate change, researchers warn.

That’s the conclusion of an international team of researchers who have published an analysis of the July 2016 disaster in the December 9 issue of the Journal of Glaciology. They are claiming that in a 'once stable area' two glaciers have now collapsed within two months.

While it’s long been thought that this region of the Tibetan Plateau is stable, researchers say this may no longer be the case. The terrifying event occurred over just four or five minutes and claimed the lives of nine nomadic yak herders – and while other glaciers could be at risk, there’s currently no way to ‘predict such disasters,’ according the the researchers.

"On July 17, more than 70 million tons of ice broke off from the Aru glacier in the mountains of western Tibet and tumbled into a valley below, taking the lives of nine nomadic yak herders living there," the report said.

To perform a kind of forensic analysis of the avalanche, researchers from the Chinese Academy of Sciences joined with two glaciologists from The Ohio State University: Lonnie Thompson, Distinguished University Professor in the School of Earth Sciences and research scientist at the Byrd Polar and Climate Research Center (BPCRC), and Ellen Mosley-Thompson, Distinguished University Professor in and director of BPCRC.

The most important fact about the avalanche, said Thompson, is that it lasted only four or five minutes (according to witnesses), yet it managed to bury 3.7 square miles of the valley floor in that time. He said something—likely meltwater at the base of the glacier—must have lubricated the ice to speed its flow down the mountain.

“Given the rate at which the event occurred and the area covered, I think it could only happen in the presence of meltwater,” Thompson said. Other nearby glaciers may be vulnerable, he added, “but unfortunately as of today, we have no ability to predict such disasters.”

Researchers could not have predicted, for example, that a neighboring glacier in the same mountain range would give way just two months later, but it did in September 2016. That avalanche appears not to have resulted in any deaths, and the cause is still under investigation.

The researchers used satellite data and GPS to get precise measurements of how much ice fell in the first avalanche and the area it covered. They’ve since pieced together more answers by working with computer modelers who were able to replicate the avalanche virtually. In those simulations, the only condition that led to an avalanche was the presence of meltwater.

“We still don’t know exactly where the meltwater came from, but given that the average temperature at the nearest weather station has risen by about 1.5 degrees Celsius (2.7 degrees Fahrenheit) over the last 50 years, it makes sense that snow and ice are melting and the resulting water is seeping down beneath the glacier,” Thompson said.

Glacial collapse is unprecedented in western Tibet, which for decades has resisted the effects of climate change while glaciers in southern and eastern Tibet have melted at an accelerating rate. Increased snowfall has even led to the expansion of some glaciers in western Tibet—and the extra snowfall likely played some role in the avalanche by creating additional meltwater, said Lide Tian, a glaciologist at the Institute of Tibetan Plateau Research of the Chinese Academy of Sciences and lead author of the paper.