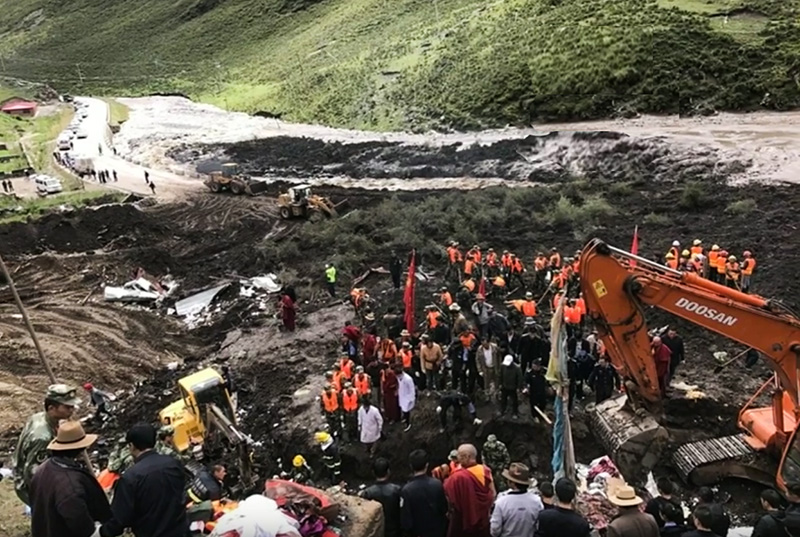 Dharamshala — At least seven people were killed and two injured in a landslide in the Machen County, Amdo region of north-eastern Tibet, on Wednesday morning, August 30, 2017.

"The seven Tibetans died in landslides caused by heavy rain in Ragya village in Machen County," sources in the region told TPI, adding: "These are the names of those killed in the landslide: Tsondue, Dollo, Netan, Jigme Dolma, Tsamkyi, Sangye Dolma, and Druklha Dorjee."

The landslide on Wednesday morning, at around 4:30 a.m. local time, hit Ragya village in Machin county leaving nine people buried. All the buried have been found. Seven were confirmed dead, and one was seriously injured while another sustained minor injuries.

State-run Chinese media agency Xinhua News also reported that seven people were killed and two injured in a landslide that struck a village in Machin county of north-eastern Tibet.

The county authorities reportedly dispatched more than 600 rescue workers, and evacuated around 90 herders as well as about 1,200 cattle. The local fire department sent a fire engine and 13 fire fighters to carry out rescue operation. The landslide has also blocked a national highway and a river. Rescuers are clearing the road.

At least 23 people were killed and 12 others are missing in a landslides triggered by incessant rains in Guizhou province on Monday, China, according to state media reports. "So far, rescuers have pulled 31 people out of the debris, 23 of whom were already dead," rescuers said. More than 2,000 people have been mobilised to search for the missing.

The landslide hit Zhangjiawan Township, Nayong County affecting 34 households. More than 600,000 cubic meters of rock and mud hit a village. The province has seen continuous rainstorms over the past week as a result of two recent typhoons - Hato and Pakhar.

In June and August massive landslides in the southwestern province of Sichuan killed more than 30 and left scores missing. In July 63 people were killed by landslides and floods in the central province of Hunan. Some 1.6 million people were forced from their homes.

Last week, the powerful Typhoon Hato killed 18 people as it tore across southern China, including Hong Kong and Macau.