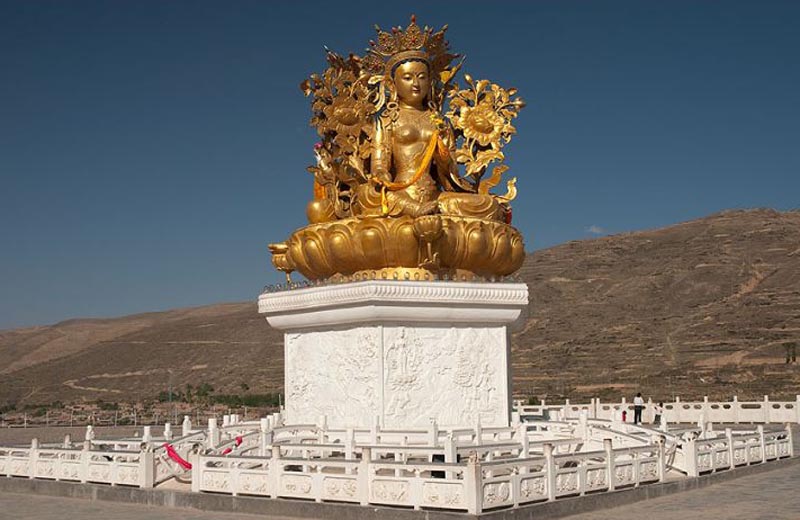 Dharamshala- In the name of development in restoration, Chinese authorities have undertaken a number of construction projects at Rongpo Monastery in Rabkong, Eastern Tibet. According to latest confirmed information received by The Tibet Post International, the Chinese have constructed a large park in front of the monastery and added a large, impressive gate to the front entrance. The monastery has now become a tourist attraction with ticket-selling windows on either side of the gate. Rather than benefiting the monastery, however, the proceeds from entrance fees have gone to the Chinese government.

In 2007, the Chinese authorities declared that Rongbo Monastery was in need of development and announced that they would spend a large sum re-designing the entrance and grounds. In 2008 they began construction on the gate, which was completed in 2009. After the construction of the ticket windows, the monastery began to draw tourists from inland China and abroad. In early 2010, according to report filed by Lobsang Kunchen the Chinese authorities began controlling the ticket sales, which amount to 20-30 thousand yen per year.

In 2009, Chinese authorities also promised to build a kitchen for the main prayer hall of the monastery. Instead, they built a three-room wool shop operated by Chinese workers. Shortly thereafter, a few monks confronted the Chinese authorities accusing them of gambling and drinking in the monastery and defaulting on their promises. Later, the monks set the door to the wool shop on fire. The monks avoided police retaliation, but received a stern scolding from the monastery’s disciplinary head.

Also in 2009, the Chinese began construction on a 6-story building, which they claimed would be a residence hall for monks. Instead, the building has been filled with Chinese-owned shops and offices for Chinese-appointed monastery supervisors and other relevant departments.

Kunchen from Rebkong reports that the 8th Shar Kyabgon, the most excellent religious counselor of Rabkong and head of the monastery, avoided involvement with this issue, but many other monasteries have suffered similar disappointments. Many Tibetan monks have suffered greatly after falling for the tricks and false promises of Chinese authorities.