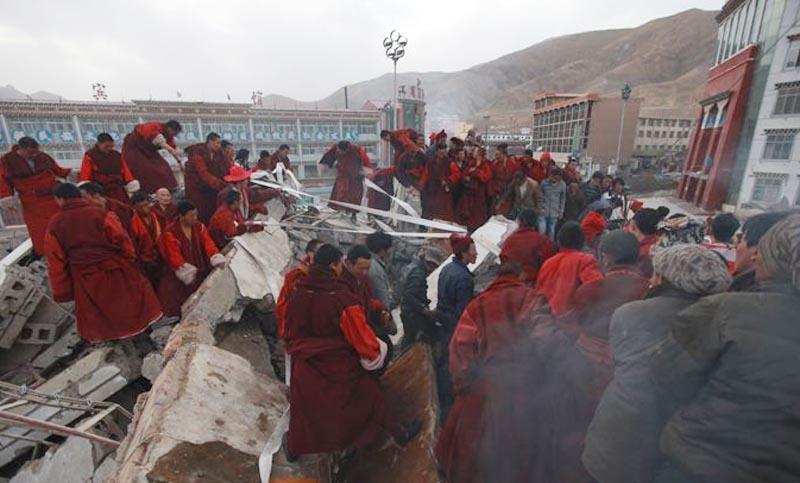 Dharamshala: Despite the very public and well promoted rescue effort launched by Beijing in the Yushu region of Tibet that was ravaged by a 6.9 magnitude earthquake on Wednesday, Tibetan Buddhist monks say that it is primarily their assistance and support that has done the most help for the region in its time of crisis.

"We're organizing ourselves. We don't need the government to take care of everything. It's easier for us to help Tibetan people," said Cairang Putso, a 28 year old monk who helped excavate survivors from the rubble.

He may have a point. In light of the troubles and conflict that have constantly plagued China's 50 year occupation of Tibet, it is easy to see how local survivors of the quake might be more receptive to aid from fellow Tibetans then from the Chinese government, which is often viewed
with hostility and resentment among the residents of the Tibetan plateau. To add to local trepidation about Beijing's support, many of the houses that collapsed were ones initially built by the government for previously nomadic people through projects that allegedly aimed to protect grassland and stimulate modernization.

Said Duojia, a 25 year old monk from the Gyegu monastery, "We monks were the first ones on the scene to help people after the earthquake, not the officials and soldiers. We've done more than the government, because we know our people so well."

Indeed, alongside the government aid workers hundreds of monks are plainly visible in their distinctive maroon and saffron robes. Many monks helped locals identify family members from among the hundreds of corpses that have already been recovered, while others provided spiritual assistance by chanting Buddhist prayers for the dead. Still more prepared food for the
survivors and helped sift though the wreckage with little shovels and stakes brought from their monasteries. Many Tibetan high lamas have even sent donations to facilitate relief efforts.

While the Chinese government is discouraging any increase of foreign aid workers to Yushu for fear of exhausting the limited resources of the region, many monks have traveled hundreds of kilometers in crowded buses or trucks to provide relief.

"This shows that we lamas are not, as the rumors say we are, rioters and troublemakers," said Jiumi Jiangcuo, head abbot at the town's main monastery. In the wake of such a catastrophe, the victims of the quake can hopefully take some small comfort in knowing that they are surrounded and supported by those who share their spiritual and cultural heritage. Despite this, Chinese workers reportedly turned away Tibetan college students from the neighboring city of Silang who attempted to come into Yushu to volunteer their help with aid efforts.