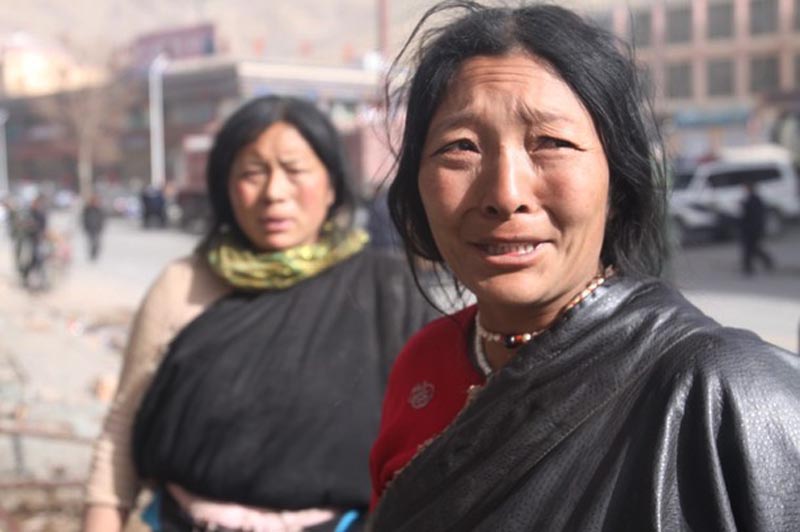 Dharamshala: An exiled Tibetan returnee was arrested yesterday for staging a solo protest in front of Jokhang temple (Tsuglakhang) in Lhasa, according to confirmed information received from a reliable source by the Tibetan Centre for Human Rights and Democracy (TCHRD). Dharamshala: Samdup Gyatso, a 28-year-old, was arrested by around seven Public Security Bureau (PSB) officials during his brief solo protest in front of Tsuglakhang temple in Lhasa yesterday.

According to sources, at around 3:20 PM (Beijing standard time) during the peak hour for religious activities around the Tsuglakhang temple, Samdup Gyatso staged a lone protest carrying the banned Tibetan national flag in his hand and had another stitched on the back of his shirt. He shouted slogans calling for the "quick return of the exiled Tibetan leader to Tibet", "release Panchen Lama" and "proper allocation and delivery of earthquake relief received from international donors to the much needed nomadic communities in Kyegudo." He was immediately arrested by PSB officials and whisked off in a police vehicle. There is no information on his current whereabouts.

Samdup Gyatso was born into a nomad family in Haiyan County, Tsochang (Ch: Haibei) "Tibetan Autonomous Prefecture" (‘TAP') in Qinghai Province. He was a former student of Sherab Gatsel Lobling, a Transit School for newly arrived adult Tibetan refugees in Dharamshala. Before that he was also a monk of Jabdrung Gartok Monastery. Samdup came into exile in November 2007 and studied for a year at Sherab Gatsel Lobling School. In March 2008, he returned to Tibet via Tibet-Nepal border of Dram and was arrested for carrying several books of speeches by the Dalai Lama and subsequently detained at Shigatse PSB Detention Centre for one month. He was later shifted to Drapchi Prison where he spent the next six months. He returned to his hometown after his release from prison in October 2008.

This is the second known case of a Tibetan being arrested in connection with the recent earthquake that devastated the Tibetan areas of Kyegudo (Ch: Yushu/Jiegu) in Qinghai Province, killing thousands of Tibetans and injuring tens of thousands. Earlier on 23 April, Tagyal, a renowned Tibetan writer in Xining was arrested for signing an open letter of condolence to the victims of the disaster that criticized the Chinese government's handling of the earthquake relief efforts. The open letter was written by a group of prominent Tibetan intellectuals based in Xining, Qinghai Province just three days after the earthquake. Tagyal writes with the pen name "Shogdung" (morning conch) and worked for the Nationalities Publishing House in Xining.

TCHRD fiercely condemns the arbitrary arrest of Samdup Gyatso. His action constitutes nothing more than a peaceful exercise of fundamental human rights enshrined in the Constitution of the People's Republic of China and other major international human rights covenants to which the PRC is a signatory. The Centre believes the grievances expressed by Samdup during the protest represent views shared by a broad spectrum of Tibetans in Tibet.