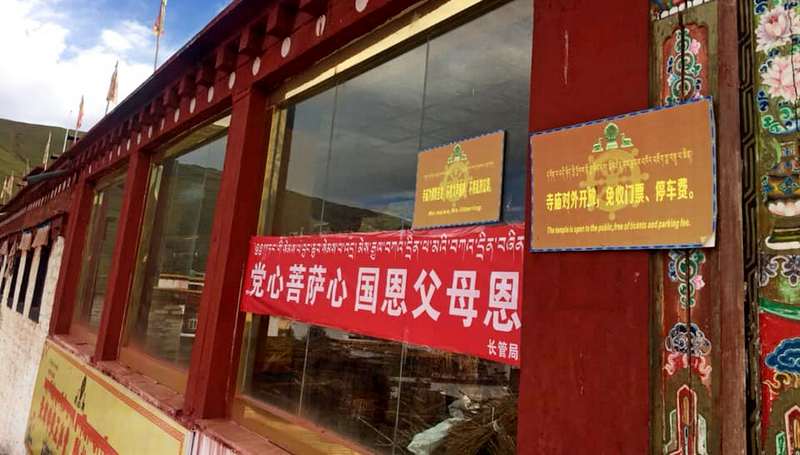 "The communist party is like a bodhisattva and China's state is like parents," displaying on a large banner written in Tibetan and Chinese hanging on the wall of the Lithang Monastery, eastern Tibet, on July 6, 2019. Photo: TPI/Liu Ying

Dharamshala, India — The Tibetan plateau is Tibet itself. So actually I didn’t know much about Tibet at first. I began my journey by getting a train from Bejing to Xining in the Qinghai province. Then I found out that Kumbum Monastery wasn’t far from it so I went there to learn more about Tibet, Liam Flag, a western tourist who recently traveled to Tibet and parts of China around last year. He recounts his experience visiting Tibet through a series of questions:-

Q1) What motivated you to go to Tibet? What were some of the places that you visited while you were there?

A1) Well I first went to China originally because it was something totally different for me. When I reached there I didn’t really know what to do. That’s when I started to read about Tibet. I found out that it would be very difficult to be able to get into the Tibet Autonomous Region (TAR). But then I came to know that I could learn more about the Tibetan culture without having to go to TAR. The Tibetan plateau is Tibet itself. So actually I didn’t know much about Tibet at first. I began my journey by getting a train from Bejing to Xining in the Qinghai province. Then I found out that Kumbum Monastery wasn’t far from it so I went there to learn more about Tibet.

After visiting the monastery, I visited the Rebgong county which is famous for its Thangka paintings. From Rebgong I went down to Songpan county which is in the western Sichuan region. I also stayed at a few different towns near the Aba grasslands region there. I eventually went up to Lithang county which is situated in the western-most Sichuan region. Then after that, I moved back down to the Chengdu then after that I moved away from the Tibetan area. But I spent most of my time in various small towns of Tibet that I can't remember the name of. Haha.

Q2) Was it difficult to obtain a visa for Tibet and parts of China?

I didn’t say anything about Tibet. They wanted me to stay in hotels because they wanted to keep a record of me. But yeah the visa process was quite difficult because I remember that I had a very minor mistake in my visa application and I had to come back and correct it again. But compared to others I think my visa application process was fairly easy because actually, I think there was something wrong with my visa. But the lady at the counter did let me away with it. I talked with an American couple and they also said that the visa process was very difficult for them.

Q3) What was your biggest cultural shock after arriving in Tibet?

A3) I think that the biggest cultural shock for me was the language. There are no actual alphabets in the language there. I didn’t find many people who could speak English. I was there on my own as well and it was lonesome for a bit as because of the language you can't really talk to many people. Even trying to find places where you want to go, the signs are all in Chinese characters so you don’t really know what they mean and you are kinda lost.

Q4) Can you share any incident with us that touched you while you were in Tibet?

A4) Yeah. When I was in Rebgong I was looking around the monasteries there and I was walking by. That was when the monks who were nearby called me to eat with them. They offered me a lot of bread, tea, and fruits to eat. I ate and had a conversation with them for a couple of hours. They were delighted to have me there and were very hospitable. Then after some time another woman came, I think she was a Teacher at a local school and she spoke English. She was able to translate what I wanted to say to the monks and vice versa. It was a nice experience.

Q5) How was your experience visiting monasteries and other traditional places of worship?

A5) It was cool. The places itself were very beautiful. I was by myself and was walking by all these monasteries and it was very quiet. It was completely different from Bejing where it's all noisy. When I got to Tibet, it was totally different and I didn’t really expect it. There were no foreigners and fewer Chinese around. I remember that at one time I was actually walking in the wrong direction around a monastery and then the monks came and told me the right direction. It was good.

Q6) Why do you think people should visit Tibet?

A6) I think people should visit Tibet because to learn more about its culture and what's happening out there. I thought I knew a little more about Tibet compared to the people living where I am from but when I arrived there I realized that I didn’t know that much about Tibet at all. I think its kind of important because at one point in the western world the Tibetan cause was a big thing but now you don’t hear much about it as much these days. Not a lot of people know about it especially at the place from where I am from. I think it is important for people to know about Tibet and not forget about it.