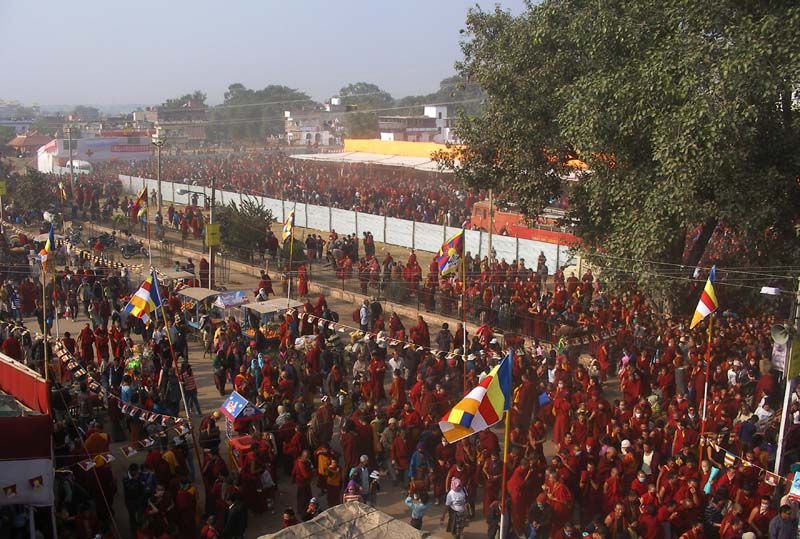 Before conferring a long life empowerment to an audience of 50,000 followers in Bodhgaya yesterday, Tibetan spiritual leader His Holiness the Dalai Lama spoke briefly about the Dolgyal controversy.

He advised his devotees to resist the worship of Dolgyal (Shugden) as a potentially divisive practice, asking those who propitiate Dolgyal not to receive his tantric initiation, which he claimed would be "harmful to the teacher-disciple relationship."

His Holiness detailed the lengthy historical conflict between Tibetan Dalai Lamas and the Dolgyal deity, citing the 5th and 13th Dalai Lamas as having spoken out against Shugden as a threat "to the welfare of beings in general, and the Tibetan government headed by the Dalai Lamas in particular".

He explained to his Chinese devotees that," In Taiwan and China, the Dolgyal followers are tying to have influence with the help and support of Chinese government. They use it [their practice] as a tool against me, claiming that the Dalai Lama was censoring them. When some Tibetan monasteries tried to stop the practice for a while, the Chinese government didn't allow them, and then slowly it became a political issue".

On the matter of Dolgyal followers' right to religious freedom, His Holiness stated, "actually it [Dolgyal worship] is unrelated to religion, because in the Buddha's commentaries and teachings, except for the worship of Dharma protectors like Mahakala, the worship of deities is not mentioned. It is wrong to venerate house and mountain deities more than Buddha."

In the end, he declared, "I have explained the reasons why I am against the veneration of Shugden and given my sources in a very detailed manner. It is my duty to tell the real story. It is up to you to accept it or not."

The Tibetan leader and head of the Gelugpa sect asked foreigners in the audience to research and analyze the facts [about the Dolgyal controversy] to better understand the conflict.

N.B. This has been translated from the Tibetan original report. If there is any discrepancy between this and the Tibetan version, please consider the Tibetan authoritative and final.