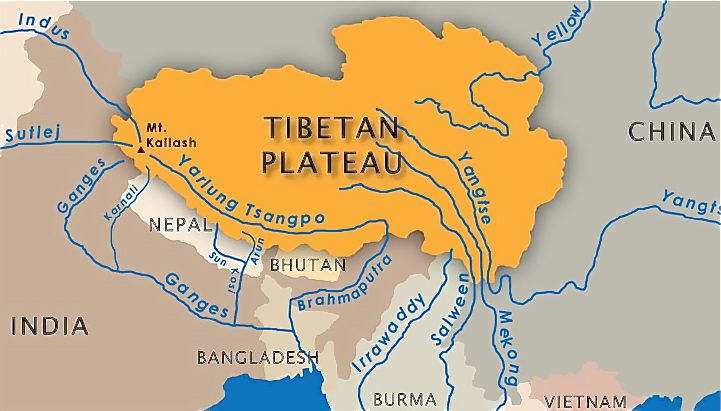 Dharamshala, India — With an elevation of more than 4,000 meters above mean sea level, the Tibetan Plateau physically dominates the geographical map of the world. The entire plateau stretches for almost 3,000 kilometers from west to east and 1,500 kilometers from south to north. It holds the Hindu Kush Himalayan Ice Sheet, considered as the largest ice mass and reservoir of fresh water apart from the two poles, hence the name ‘Third Pole’.

The Tibetan Plateau is the major resource of big rivers and a rich repository of indispensable freshwater resources that are shared across Asia. A large percentage of the world’s population depends upon rivers originating in Tibet, including the Indus, Ganges, Brahmaputra, Irrawaddy, Salween and Mekong rivers. Incomplete statistics show that there are more than ten rivers in Tibet with drainage areas greater than 10,000 square kilometers.

Tibet is also known as the ‘Water Tower of Asia’ as it serves as the source of ten major Asian river systems flowing into ten countries, including many of the most densely populated nations in the world: China, India, Pakistan, Nepal, Cambodia, Laos, Thailand, Vietnam, Burma, Bangladesh, and Bhutan. The rivers of Tibet are characterized by an uneven seasonal distribution of runoff, low water temperature, abundant flow, small inter-annual change, low sand content, and good water quality. Of the world’s 7.7 billion people, for more than 1 billion living in South Asia from Afghanistan to the Ganga-Meghna-Brahmaputra basin and in Southeast Asia, the rivers flowing from Tibet constitute the lifeline.

The Zachu or Mekong River, originating from central Tibet through Yunan province in China and then flowing through Laos, Thailand, Cambodia and finally ending its journey in Vietnam is the lifeline for the people living in Mekong-region countries. This river directly supports approximately 70 million people along its basin from fishermen to farmers.

Beyond the populations residing in the watersheds of these rivers are the additional millions of people who depend on monsoon rains drawn inland by the Tibetan Plateau. It was also indicated that the Southeast Asian monsoon that recharges most of the rivers downstream varies in intensity according to the snow cover on the Tibetan Plateau. For China alone, 30 percent of its fresh water supply is met from the rivers flowing from Tibet. These rivers give hope to and sustain life of millions of people downstream, from the arid plains of India and Pakistan to the rice paddies of Southeast Asian countries.

However, rapid population growth, industrialization and climate change threaten water security across South and South-East Asia. With China, India, Pakistan, Nepal, Vietnam, Bangladesh, Bhutan, Burma, Cambodia, Laos and Thailand all dependent on rivers that have their headwaters in Tibet, predicted water shortages threaten the livelihoods of millions of people living in countries downstream. Tibet is warming twice as fast as the rest of the world. Glaciers are melting, putting millions of people downstream at risk from floods, water shortages and sea level rises, threatening coastal communities.

China, which requires water to meet the needs of approximately 20 percent of the world’s population, has harnessed freshwater from the Tibetan plateau to meet its own food and water requirements by building dams, irrigation systems and creating water diversion projects. Despite the critical state of the Tibetan plateau which remains ecologically sensitive and seismically active due to its high elevation, China is still moving on with its ambitious plan to expand the hydropower generation on the headwaters of Asia’s major rivers — the Yangtze, Yellow, Brahmaputra, Indus, Mekong, and Salween Rivers.

Chinese control in Tibet places China in a dominant position to control Asia’s water sources. Dwindling water sources in the trans-boundary rivers of the Tibetan Plateau threaten water security and create a high potential for geopolitical conflict in the region. As a result of dam building, however, the countries downstream have been, and will remain, negatively affected through altered water flow and increased sedimentation.

The International Centre for Integrated Mountain Development (ICIMOD) has revealed alarming details about the sustainability of the Himalayan glaciers in the time of climate change. According to their findings, the current trend of melting glaciers suggests that the Ganges, Brahmaputra, Indus and other rivers across the northern India plains would most likely become seasonal rivers in the near future, flowing only in the monsoon season and drying up during winters. In this way, downstream agriculture will be seriously affected and soil salinity will increase.

World Wide Fund (WWF) for Nature, formerly known as World Wildlife Fund, named the Indus River as one of the world’s ten rivers most at risk. The Indus river which already faces an acute shortage of water flow due to climate change suffered more obstruction after China built a dam on the dying river (in Ngari, Western Tibet) without informing the downstream countries - India and Pakistan.

So far China has dammed every major river and its tributaries in Tibet and has unveiled plans to construct even more dams in the coming years. The Chinese dam building boom and its water transfer projects are creating additional worries to the lower riparian states, especially in India where it was estimated that by 2030 the water demand will be higher by 50 percent from the current demand of 740 billion cubic meters.

The damming activities along the upstream of Mekong have significantly affected the flow volume of the river. Fishing boats are seen stranded on the shores of the dried Mekong River in Mukdahan Province and at Nakhon Panam in Thailand. The livelihoods of the local fishermen and many other communities from Cambodia are threatened by the reduced flow of the river water but their concerned voices are muffled by the aid their government receives from China. Thailand has vested interests in China’s hydropower production as it purchases 3000 megawatts of power generated by Chinese dams. Economic interaction between the countries through which a river flows complicates the issue of trans-boundary river negotiations and creates confusion regarding future food and water security.

Not only are these rivers and tributaries dammed for generating electricity but some are also polluted with chemicals and other toxins dangerous for human consumption. Industrial activities also threaten the quality of Tibetan freshwater. Previous deforestation has created erosion and siltation. Mining and industrial development has contributed to pollution from heavy metals within Tibet. For instance, the tap water of Kumbum monastery in Amdo detected high concentrations of lead (Pb) due to a mining activity. Similar cases of mining chemicals polluting the natural water supply are common wherever mining activities are prevalent.

Tibetan land is delicate and it cannot absorb the river water diversion projects, constructions of dams, mining and transportation, industrial and other activities. Such activities are leading to receding glaciers in Tibet and in the Himalayas. There are also reports that the Tibetan nomads are gradually being made to shift from their traditional grassland and resettle in bleak villages. Unfortunately, these activities might invite eco-disaster. This might aggravate the meltdown of Himalayan glaciers, further resulting in the drying of rivers. Therefore, the Tibet water resources should be accepted as a global common. Any distortion in the ecology of Tibet and its delicate river system is likely to affect the global environment. The impact on Tibet’s landscape and its natural resources due to climate warming and human intervention will threaten not only the future food and water security of many nations but also their development.