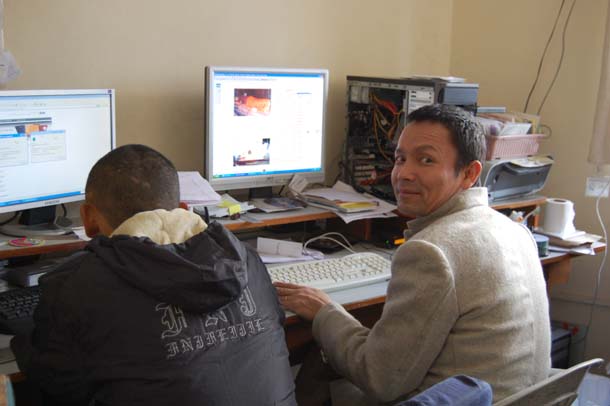 My Second Home——My opinion of Nyimon Computer Centre at Dharamsala

By Zhu Rui - Translated by Dekyi

Dharamshala: TibetPost-26-January-2009-People have to admit, the high Himalaya Mountains don't block all the dark clouds. The environment in Dharamsala is not uncontaminated. However, the Nyimon Computer Centre is pure, simple and safe as a clear blue sky.

Unlike the other Internet cafes, there is no common chaos and noise: everything is in order and quiet, and the air carries the smell of books.

Most of the hotels in Dharamsala don't have Internet facilities; therefore, the streets are full of Internet cafes. Just a few steps away from my hotel there are several cafes side by side. But, I take my laptop every day, climb up a high-slope, and then down to the Nyimon Computer Centre, which is not so nearby, to check my email and read the news.

From the start, the Nyimon Computer Centre has attracted me for two reasons: one is its fast speed, and second is in spite of all the other Internet cafes' high prices, since the charges are lower here. There is also one of my favorite pictures of His Holiness the Dalai Lama, at a young age, hanging on the wall. Under the photo is written:

No matter what is going on

Too much energy in your country

Is spent developing the mind

Instead of the heart

Not just to your friends

In your heart and in the world

And I say again

No matter what is going on around you

His Holiness the Fourteenth Dalai Lama"

I am usually accustomed to checking my email around 8 o'clock in the morning. That early, the iron gate of the Nyimon Computer Centre was locked, because they don't open until 9 o'clock. But I am impatient, which becomes a habit after eight years living in North America. Indeed, for most people living in the West, time is valuable as gold. However, in the other Internet cafes, I am never comfortable, especially when they charge higher prices. Those few Rupees take away my desire to ever go back again. A few times, I've just knocked the iron door of the Nyimon Computer Centre.

"Good morning!" says Nyima Dhundup, the director of the Nyimon Computer Centre, immediately appearing at the door with smile.

"Sorry to disturb you so early!" I say.

"It doesn't matter." Nyima Dhundup says. He quickly helps me connect to the Internet and offers me a cup of sweet tea, as usual. The tea tastes very good, not too light, not too greasy, just the way I prefer the most.

I and all the other regular customers of the Nyimon Computer Centre are very familiar with Nyima Dhundup, the director of the centre. He was born in the border of Nepal and Tibet when his mother was escaping Tibet into exile. Later, he studied at the Tibetan Children's Village school (TCV) in Dharamsala until class twelve. Later, he went to Colegal Tibetan refugee community in South India and worked for Dzongsar monastery for eight years. He was a secretary and taught English to the monks. He finally returned to Dharamsala and stayed another eight years at Institute of Buddhist Dialectics (IBD).

At that time, the Institute of Buddhist Dialectics started a computer training course. As a staff member, Nyima Dhundup was responsible for both the management and teaching computer science. At the same time, he also had to continue learning computers. He said, "During teaching, I learned many things, as His Holiness the Dalai Lama says, 'well-profit for others, at the same time, oneself is also profit.'  I feel too much, in this respect. "

However, the pay at the Institute of Buddhist Dialectics was too low to cover his family's expenses. So, Nyima Dhundup started his own computer training courses. He was not only able to make a living, but also could continue to teach computer literacy. Nyima Dhundup also engaged in design, video, and music. In 2005, out of his own pocket, he wrote and published the "COMPUTER COURSE FOR BEGINNERS", as a teaching manual for beginners to learn the computer science, and was sent to monasteries and schools, free of charge.

So far, he has trained more than 400 students at the Nyimon Computer Centre, and even more at the Institution of Buddhist Dialectics. Nyima Dhundup has taught a total of more than a thousand students in the exile community.

Respect for monks and nuns is a convention in Tibetan society since ancient times. Nyima Dhundup's teachings also reflect this moral spirit: although the monks and nuns pay the same as others, he always gives them the extra time to learn. For example, class is customarily an hour for most students, but monks and nuns are given two or even three hours.

To help monks and nuns continue utilizing their computer skills after returning to the monasteries and nunneries, Nyima spends more time in training workshops, teaching them how to repair computers. However, many monks and nuns have said that although Nyima Dhundup's computer manual is very good, it isn't easy to read because it's written in English. Nyima then embarked on translating it into Tibetan.

"Unlocking Tibet "is a book co-written by the Tibetan writer, Woeser, and her husband, Wang Li Xiong, the Chinese writer who translated the book into English, which was welcomed by many readers. The cover of this book was designed by Nyima Dhundup. "Why is your design Wang Li Xiong and Woeser standing back-to-back?" I asked.

"One is a Han Chinese and the other is a Tibetan: they sometimes are not in the same point of view, but, on the point of the introduction, of the real situation, they are the same. Both of them are not afraid to face the danger of the repercussions from the Chinese authority for the services of justice."

Nyima Dhundup has designed many book covers, but never used his name before he was requested to for "Unlocking Tibet".

I occasionally run into an old friend in the streets of Dharamsala, who I knew in Lhasa ten years ago. We went to a nearby Internet café where my computer was inexplicably attacked by a virus. After that, I was afraid to go to any Internet cafes.

One day my old friend took me to the Nyimon Computer Centre to make a copy. I asked, "Why do you especially come here?" "Here, it is the cheapest," he said. Indeed, Nyima Dhundup is not motivated by profit, unlike the character of many businessmen; he appears more like a charitable person.

On one occasion, Dawa, another working in the Internet café, saw the photo on my computer of His Holiness the Dalai Lama and me, and then said, "Give it to me, right?" I did not hesitate to copy into his U disk. And said, "This is an eternal commemoration that I do not want it published." He nodded. Particularly in Dharamsala, with the complex environment, I trust Nyimon Computer Centre more than my old friend. And where does this trust come from?

In the quiet cyber room, Nyima gives clear and patient guidance to children and elderly people to learn computers. Such a conscientious and responsible attitude, as well as the treatment of his staff, is always out of trust and friendship. I always admired his attitude.

Before leaving Dharamsala to go to Varanasi for His Holiness the Dalai Lama's teaching, Nyima had given me a red paper and said, "This is a small gift." I said, "Can I open?" He smiled and nodded. It turned out that was a silver necklace, dotted with pure silver round ornaments. I said "Thank you", and placed it on the table. Nyima asked me, "You know what this is?"

"Is it just a necklace?"

"Are there other meanings?" "Let us take a look." Nyima picked up the silver round ornament.

I picked it up again, following Nyman's hints, I looked carefully at that silver round charm. There was actually a portrait printed on the charm. It was my special treasure, the picture of His Holiness the Dalai Lama and me! That was the photo I gave to Dawa as a gift.

As Dawa walked by, he said "At first, I asked you for the photo because I thought of this gift for you today."

That night, Nyima Dhundup let Dawa take all my heavy baggage to the bus station, then Dawa also got on a vehicle, sitting on my side: "I want to come to Delhi with you until you get on the train to Varanasi," he said. I said," This is too much to waste your time! "" No, I am also going to Delhi to buy some computer supplies, really, is not entirely a matter for you." Dawa stopped for a while before saying, "My boss said you are very kind and always understanding of Tibetans in Exile, we should do something for you."

In fact, I did not do anything for the Tibetan people, but in my morals I tell the truth: this is the most basic quality in a person.