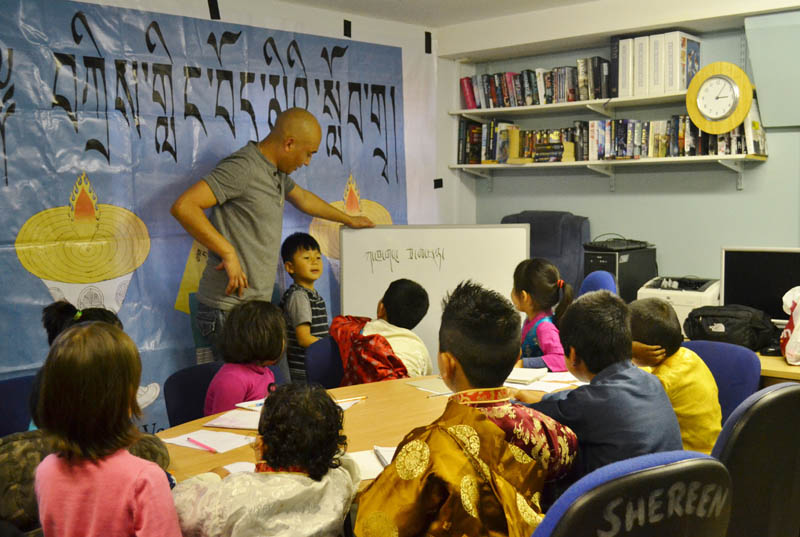 London- The education of Tibetan children in exile is of paramount importance to the Tibet cause. Many would deem that teaching children about their homeland, most of whom have never even seen Tibet would be difficult. However, as a shining beacon of hope, the Tibetan community in Woolwich, London (UK) have proved otherwise.

‘Tashiling Tibetan Children's School, Woolwich' is an education programme run by the Tibetan community in East London, which number at around 100.

A growing concern faced by parents in the community, and indeed globally for the Tibetan diaspora, was that Tibetan children were growing up knowing little about their country's rich culture, and particularly its unique language. The community in Woolwich discussed the issue, and on August 13th 2011, set up the first classes for the Tashiling Tibetan Children's School.
The school has proved an inspiring success.

The students, which number at least twenty, have lessons on Saturdays attentively. As a reminder and practice of Tibetan culture, the students wear traditional Tibetan chupas; silk garments which outmatch any generic British school uniform. Upon a visit to the school, I was stuck by the genuine alert attentiveness and hard work of both students and staff. The importance of learning the Tibetan language was genuine and heartfelt.

Local community member Tendak; owner of ‘Kailash Momo Restaurant'; a community hub and gathering point for Tibetans alike, stressed the unity of Tibetans across the UK, not merely those in Woolwich, London. He highlighted that the school was not an exclusion of Tibetans in other parts of the country, merely an important tool for the Tibetan culture in exile.

Over a wonderful Tibetan dish at his restaurant, he also added the strengths of the ‘Tashiling' community; how by working together democratically and openly Tibetans are helping each other, both inside and outside of their homeland. Both the success of Kailash Momo Restaurant and the new school project, proved two examples of creating Tibetan culture in exile to flourishing success.

In an interview for the TPI, designated school teacher Tashi highlighted the basic aims of the education programme.

‘We teach the children the Tibetan language mostly. Some of the children are very young, we have the basics; ABCs. There are two classes, for the younger students basic Tibetan, and the older students [who are at least ten years old]'.

Pupils listen to Tashi attentively, and he corrects and guides them through the language. Despite required five-day lesson at school for British students, it is encouraging to see Tibetan students so attentive on Saturday morning, a day which most of their classmates have off as a weekend.

Staff helpers, usually parents of the children, also assist in the classes, guiding and teaching the children to listen carefully.

The importance of the new school is highlighted by local Tibetan community leader, Ugyen Norbu, who recounted: This school is very important. We are in danger of losing our language and culture unless something is done'.

Within three short months the Tashiling School has already grown, thanks to the work of the small society. His Holiness the Dalai Lama is due to visit the United Kingdom in the summer of 2012. The motives and hard work of this strong Tibetan community in London are sure to impress and delight him beyond expectation, and are an example the Tibetans globally.