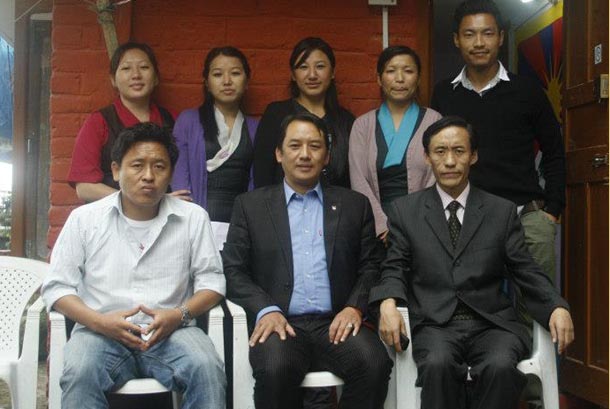 Dhartamshala: - A newly founded "Tibetan Social Service" (TSS) said, hoping to provide a social service or needed social assistance to the community in exile, particularly poor and elderly people, and its programmes will take aim at promoting both social and political awareness among the youth of Tibet and their future education skills.

Mr Chime Yungdrung, the director of TSS introduced the new office and its team members, after reading its aims and objectives, during a short ceremony which took place Sunday, October 28, 2012 at its newly opened office in Dharamshala.

Around 50 people, including chief guest Ven Mogri Tenpa, a member of the Tibetan Parliament in exile, Ms Nguyen Thi Ngoc Hanh from Dharamshala based Vietnam - Tibet Alliance Fighting for Freedom, representatives of Tibetan NGOs and invited reporters were attended the inauguration event.

"International level, Tibetan cause has been quite successful. But, within our own community, young Tibetans are increasingly losing their interest in the cause, primarily due to lack of skilful political awareness and agitation fatigue, TSS said in a statement, posted on its social network.

The core purpose of this NGO, said Mr Chime, "Tibetans in exile face many difficulties as they are dispersed everywhere. There are many places where the Tibetans administration still cannot reach and some remained unreachable. but that doesn't mean it's not interested in doing that. Therefore, with this hope, we will be able to provide social service to those needed."

"More importantly, the organisation is hoping to put more efforts to educate younger generations about modern education and will be trying to bring them to follow better poltical view in future," he added.

He also said that it has aimed at providing free services to the Tibetan community, especially in the areas of lacking leadership training, awareness programmes, educational support, community services and promote support for Tibet.

Continue reading, he said that due to economic and other related hindrances, many young energetic Tibetans fail to accomplish their goals. "Thus, TSS aims to solve some of these problems by providing much needed assistance and opportunities," he told the gathering"

He said that TSS will "support the poor Tibetans who are facing day-by-day challenges providing for their life and survival. Especially in the settlements, they have different kinds of problems facing them like housing leakage due to heavy rain, medical needs, financial support for their daily expenditure, and insufficient money to send their children to colleges, etc."

"They don't have any source of income and need significant assistance. Although our main aim is to help at the community level because it is not within our mandate to help individuals, we would extend support in special and emergency cases similar to those mentioned above," it further added.

The newly founded Tibetan NGO consisted of 40 members from India, Swiss, Japan, Belguim, Canada, Austria, US and Italy, including four members of the Tibetan Parliament in exile.