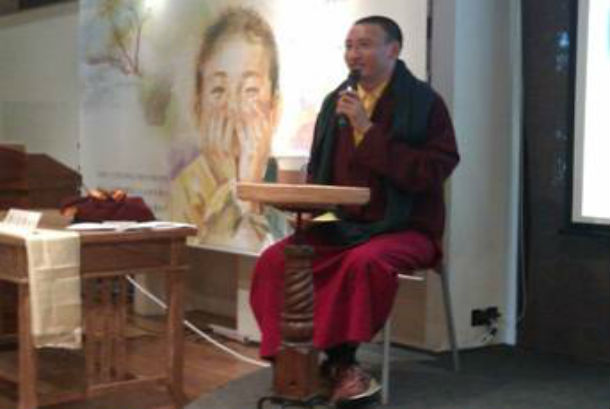 At his mother's urging, the young Tibetan entered the Chilean Karma Temple Buddhist Institute at the age of 18 to begin his studies of the Buddhist foundation, rituals, five plus line practice course.

TashiKhenpo has published Tibetan editions of his booksThe Future of Tibet(2003) and Reason of Life. After writing The Future of Tibet, Khenpowas arrested by the Communist authorities, detention, and was suspected of "destroying country unity" charges, sentenced to two years jail time.

In July 2005 he was released, and at the end of the same year he left with relatives and friends members, through the Himalayas to Bhutan and eventually making it to India. Khenpo was able to participate in the Kalachakra empowerments Puja of His Holiness the Dalai Lama in Bodh Gaya.

The Chinese version of Invisible Angelwas authored Ms. Wang Hongzhen. She applied toan organization to publish a Tibetan and Chinese edition of the book. It was this group that found TashiKhenpoand employed him as the Tibetan translator. After translating three pages, Khenpobegan writing the story of Tashi in Tibetan. Wang Hongzhen felt that Khenpo's story was more interesting, so she became the Chinese translator of Khenpo’s book.

TashiKhenpo’s book aboutTashiis dedicated to the children of Tibet, and Tashi means "auspicious" in Tibetan. It is interesting to note that the name of the author is Tashi while the name of the boy in the story is also Tashi. Khenponot only hopes that his story is well received, but also hopesto open the horizons of the reader to the world and customs of the people of Tibet.

TashiKhenpo earnestly said at the press conference announcing the sentence: "He is not willing to accept education courses provided by the Chinese Communist Party in Tibet.”